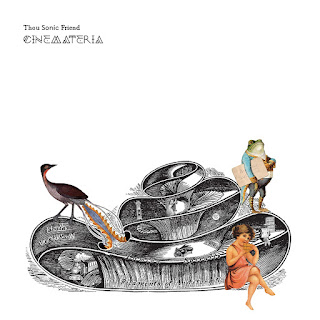 Materia (prima): indeterminate matter viewed as the material cause of the universe

The first impression of this trio reminded me of the Canterbury school approach, particularly of some Henry Cow free improvisation. Going deeper ,the flavour remained but the sound of the trio follows its own path. In the balance of the ensemble (Carolyn Goodwin: clarinet, bass clarinet, voice, Birgitte Lyregaard: vocals, percussion, objects, and Peter Tinning: (guitar, effects)) the voice is prominent, fragments of stories often dissolving into pure sound are set in a clarinet and guitar and percussions and noises landscape. The dialogue between the voice and the clarinet opens different possibilities, the guitar like a continuo weaves a sparse carpet.

Faithfull to its title, Cinemateria's  music floats between suggestions for imaginary movies and an indeterminate quality of noise and words. Sometimes,  the story told both in words and music is catching, sometimes it leaves you floating.

There can be music (track 1) introduces a dialogue between noises, voices and instruments setting the starting point of the story on the platforms of Amsterdam Central Station,

Syrinx Rhizome (Track 3) a modified subterranean sound stem that sends out roots and shoots from its nodes,

Ignorance is Gliss (track4) a chasing game among voice and instruments,

Le grand plaisir (track 5) the story goes on taking the listener to the land of Cinemateria guided by a sparse guitar and a distant clarinet in dialogue with the voice,

Indbagte Isbjorne (track 6) a twisted waltz in which the instruments drift away while the voice maintains its narrative mood,

Kari’s prayer (track7) an ascending voice over a quiet landscape of sounds until the voice starts fading joined by the clarinet,

Never signed a contract (track 8) voice and clarinet keep on their dialogue over a guitar continuo till they fade again into silence.

All in all, it’s an interesting work even though I felt the voice to be a bit too prevalent considering the fact that the texts are not always intelligible (at least to me). It is true that the voice often act as an instrument and so the text might not be so relevant but as these pieces seems structured as an evolving story it seems to me that something is missing.

The project is surely worth listening but I think the concept needs further developments to display its potential.