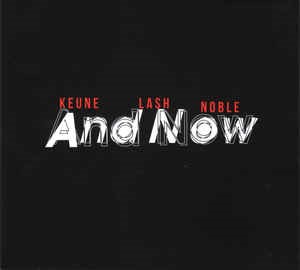 What must one sacrifice to art? Not always and necessarily life, as Friedrich Schiller says in his drama “Wallenstein“ (“And if you do not commit to life / life will never be won“) and as it may have been true for some jazz musicians who literally played for their lives - like perhaps Charlie Parker and John Coltrane. In the 1960s and 70s people often looked down on musicians who were not exclusively dedicated to music and were therefore considered amateurs (e.g. the Modern Jazz Quintet Karlsruhe), but today this is no longer an issue. An extraordinary musician like Stefan Keune also works as a librarian, which does not prevent him from regularly publishing excellent albums. His music burns at both ends, especially in his trio with Dominic Lash (bass) and Steve Noble (drums).

A few minutes on this recording - at the end of "Whatsoever", the second piece - sums up everything that makes And Now so beautiful: the breathtaking whirlpool that captures the listener, the bliss of a voice that energetically combines pain and elation; and the openness to dialogue with musical companions. In the first eight minutes of the first piece, “Well Then“, the trio explores the entire tonal spectrum they offer. The saxophone dominates with its squeaking and squeezing tones that shoot through the room like ricochets. The short runs are counteracted by percussion and bass, it sounds as if sandpaper is being pulled over metal. After this furious introduction, the music constantly alternates between very fast, wild passages and extremely slow and contemplative parts. In this way it’s strongly condensed one the one hand and on the other it’s opened wide, it purrs together and is then released again. In addition, it stumbles over uneven terrain and pants like a dog after an extensive hunt. Keune’s precision is razor sharp in contrast to his often washed-out tones. His saxophone, with its characteristic bird sounds (listen to the beginning of “Finally“), is reminiscent of the late, great Wolfgang Fuchs.

The music of this trio is consumed in the moment, in the longing for what is attainable. Everything is open and ambiguous, nervous and torn apart. Keune’s saxophone spits, stutters and flings out the riffs, it’s as if the torment of its creator becomes audible - fluid, transient and spontaneous. Underneath this rough surface, however, there’s also a beauty, but you have to expose it directly in the hustle and bustle and the excessiveness of the sounds, because at the moment of sounding it has already vanished again.

And Now is like a necessary (fantastic, absurd) corrective to reality. It’s the kind of improvisation of this trio that is able to temporarily suspend the existing order of things. Free improvisation: a rescue into the open. An exercise in freedom. Highly recommended.

And Now is available on CD.

You can buy it from www.downtownmusicgallery.com .