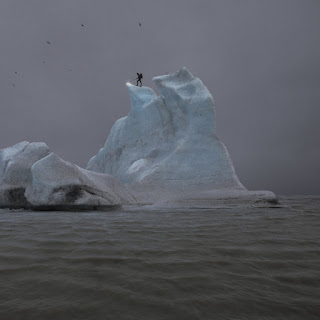 Cory Smythe is one of America’s most interesting recently-emerged musicians, as creative a composer as he is an improviser and as interested in vocal traditions as instrumental. He’s a brilliant improvising pianist, particularly apparent to this listener in live performances with the Tyshawn Sorey Trio, and his 2018 Circulate Susanna, a bizarre exploration of 19th century American song, revealed an astute cultural critique in the midst of his music.

Accelerate Every Voice extends that investigation to a capella vocal groups. Initially inspired by Andrew Hill’s 1969 project, Lift Every Voice, a combination of the Black choral tradition and a jazz group, Smythe’s inquiry into related White choral practice has taken the further step of having voices assume the instrumental functions of drums and bass, adding his own piano and electronics to a quintet of voices: Kyoko Kitamura and Raquel Acevedo Klein, voices; Michael Mayo, voice and looper; Steven Hrycelak, vocal bass; and Kari Francis, vocal percussion. Specific inspiration came from the first decade of the twentieth century, including both the Yale University’s Whiffenpoof vocal group, and the associated “Whiffenpoof Song,” a song derived from Rudyard Kipling’s colonialist poem, “Gentlemen-Rankers”: “We’re poor little lambs who’ve lost our way...” The connection is made explicit here on “The Weatherproof Song.”

The most striking characteristic of the music, though, is not its mix of contemporary jazz and classical elements with the choir format, but the extent to which the scores employ quarter-tone harmonies, both in the vocal components and in the case of the sole instrumentalist, Smythe playing a midi-keyboard tuned a quarter-tone sharp that he has placed inside the resonant frame of the piano. The result is a music that is always striking a different note, not “wrong” ones, but definitely unexpected ones and ones occurring in myriad combinations. Throughout, the level of technical polish is high, both in the demanding ensemble and individually. Kitamura, one of the most inventive contemporary singers, assumes a prominent solo role. At times the music can approach a kind of jazz scat singing‒most notably on “Mari Every Voice” and “Vehemently” ‒ while the first “Kinetic Whirkwind Sculpture I” brings the interior of Smythe’s piano to the fore., the second has a dream-like atmosphere of droning voices and electronics.

While this is largely a choral album, it concludes with a 19-minute long piece, “Piano and Ocean Waves for Deep Relaxation,” a work consisting of long, seemingly electronically altered sounds, some of which suggest voices, some suggest bell buoys, bells suspended in cages on buoys that are rung by the motion of waves. It’s very beautiful and possibly restful, though there’s a faint dissonance throughout that might induce anxiety. In his brief note to the CD, Smythe references the American composer Annea Lockwood, composer of works for both burning pianos and drowning pianos and suggests, “the calamitous choirs of piano-engulfing ocean waves presaged in Annea Lockwood’s music and presently hastening inland, the crowds gathering in America to greet them, the crescendo of our infectious chants and cheers.”