Okuden Quartet (Walerian/Shipp/Parker/Drake) - Every Dog Has His Day But It Doesn't Matter Because Fat Cat is Getting Fatter (ESP-Disk, 2020) ****½ 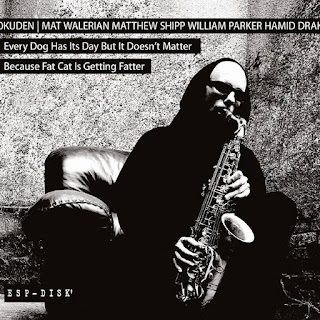 It's been a few years now since we've seen an album led by the Polish composer and multi-instrumentalist Mat Walerian. He featured on three terrific albums for ESP-Disk in 2016 and 2017, starting off with his Uppercut duo with Matthew Shipp and their album Live at Okuden . In the same year he dropped a burner of an album of the same name with his Jungle trio of Shipp and Hamid Drake. That was then followed up the next year with the terrific This is Beautiful Because We Are Beautiful People from his Toxic trio with Shipp and William Parker. In 2018 he featured prominently on Shipp's release Sonic Fiction , which stood out in a year of standouts. And now, in 2020 Walerian continues his Okuden series (Japanese for inner teachings) with Every Dog Has His Day But It Doesn't Matter Because Fat Cat Is Getting Fatter with the Okuden Quartet, a unit that brings Shipp, Parker, and Drake together for nearly two-hours of adventurous variety and flow.

The album starts with "The Forest Council" and Parker's coarse, rhythmic thrumming. Shipp adds soft, staggering chords as Walerian's reverb-heavy clarinets and flute bellow, squawk, and sing over Drake's spare percussion. It's a highly effective and moody abstraction that sets the tone for what's to come. On "Thelonious Forever" Shipp plays stabbed, angular lines that contrast with Walerian's warbly alto sax figures. Heavy blues implications abound leading right into a staccato duel between Parker and Shipp that rouses Drake into a brief solo, after which the album really takes off. Next is the three part "Magic World" suite, beginning with “Magic World Pt. 1 - Study" on which Walerian is back on clarinets, growling and shifting through a pasture of arco bass and cymbal shimmer. Shipp is brilliant per usual, his playing utilitarian, providing only what is needed at a given instant, never an off-note. The next part is called "Magic World Pt. 2 - Work" whose bass clarinet vamp is the probably biggest earworm on the album. The snaking line rides a rhythm that is highlighted with heavy pizzicato bass playing and dark piano chord accents, eventually dissolving into a series of raucous solos interspersed with rangy group interplay.

The final part, "Magic World Pt. 3 - Life" is more up-tempo and structured than the previous two parts. The melodic piece bounces linearly along it's timeline as Parker mostly limits himself to timekeeping. The suite provides a nice, playful respite from the heavy jazz to come. On "Sir Denis" the quartet return to the dark mood set at the beginning of the record. Beneath Walerian's smoky wailing the Parker/Drake rhythm section churns in a very complex interplay that is perfectly complemented by Shipp's crispness and precision. Walerian and Parker share space across the first half of "Business with William" engaging in intimate dialogue. Once Shipp and Drake enter the track briefly feigns linearity before quickly evolving/devolving into an expanding pattern of serene statements and violent convulsions. The beginning of the last piece "Lesson II" reprises the meditative, eastern sound of the Toxic trio lead off track "Lesson". Walerian and Parker dual on flute over the beginning half of the track as Drake plays sparse rhythmic support. Over the latter half of the track Walerian weaves his reeds within a powerful rhythmic framework that sees Parker and Shipp complementing and provoking statements from one another. Drake’s nearly transparent fills are vital to the proceedings, accumulating and thickening the brew until it seems it will boil over, Shipp lurches, then the tension resolves via a steady dissolution back to silence.

Every Dog Has His Day But It Doesn't Matter Because Fat Cat Is Getting Fatter is Walerian's best work yet and definitely one of the best albums of 2020. His playing style on reeds and woodwinds is distinct, while still paying homage to what's come before (though he definitely pushes the bass clarinets the furthest in terms of timbre). The band itself doesn't need me to heap praise on it, look at that lineup, how can it not be stellar? But I think what really makes this work is the track sequencing. Without the playful reprieve of the "Magic World" suite the long atmospheric and heady jazz tracks may have seemed too dense, and had the suite lasted any longer the album's flow may have felt interrupted. But as it is (I assume by design) it provides a perfect portion of reprieve as well as an opportunity for reassessment by and re-engagement with the listener. If you're a fan of any of the players involved or Walerian's previous albums this purchase is an easy one to make. Otherwise jump over to Bandcamp and have a listen, see what all this fuss is about. Highly recommended.