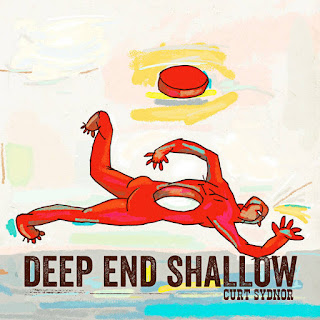 
With some albums, the impression of what a group will sound like more or less matches the music itself. It’s not a bad thing, and with many groups, the comfort of familiarity contributes to an album’s success. On others, however, the anticipatory feeling of being ready to listen to an album evaporates on play. And, as it turns out, you are not ready at all. That is the experience of listening to Curt Sydnor’s Deep End Shallow. Starting with the obvious, how to classify this music? Jazz? Funk? Avant-garde? Fusion? All of the above? What are genres, at this point? Anyway, who cares when the songs are gobsmackingly good? And if the opening of this review sounds hyperbolic, I highly recommend going directly to Bandcamp without reading another word and pressing play before coming back here. Satisfied? Onward, then.

Curt Sydnor, on keyboards, is joined by Aaron Duggan on guitar, Caroline Davis on saxophone, and Greg Saunier on drums. For readers who know Saunier from his full-time gig as drummer for the band Deerhoof, this is the third, at least, in a line of interesting albums he’s appeared on recently: Saunier joined Davis for her incredible album Alula and Anthony Braxton for last year’s Quartet (New Haven) 2014. At a certain point, footnotes and annotations stack up so high they threaten to topple themselves: Herbie Hancock-esque funk melodies; abstract, Weather Report-ish solos; fuzzy prog-inspired riffs; trippy, acid jazz grooves. Sydnor might settle into a melody for half a minute, as Davis moves to the fore for a sleek solo. Saunier turns a beat inside out, while Duggan chimes effects-laden chords. For the first several listens, each song seemed to map a distinct aural space. Over time, they’ve merged into a cohesive, addictive whole. “Starewell” opens with layered keyboards and guitar from Sydnor and Duggan, with Mikey Coltun and Ofir Ganon supporting on bass and guitar, respectively. As much as the ’70s seem to inform the aesthetic, “Fall Behind” introduces an ’80s-global-infused sensibility.

How it all works together is the very specific synthesis of Sydnor, Davis, Duggan, and Saunier: all four are master musicians, and the playfulness of Sydnor’s compositions is more warm and inviting than gnomic or frenetic. Yes, in lesser hands, etc. But, in this group’s hands, shimmery ballads like “it is what it was” and “Fieldgaze Variations” showcase an emotional dexterity that highlights, rather than undercuts, the group’s technical chops. And, of course, there’s the matter of effects and post-production, mixing, and editing. For many listeners, there’s a so-called purity that needs to be maintained: band plays live in studio; band records as many takes as necessary; album is band, “no frills.” Purists beware, Deep End Shallow was not made for you. It’s made for reveling in the endless auditory joys found within. It’s made for combing over. For heavy, over-ear noise-cancelling headphones. For skyscraper speakers. For languorous, sweltering days and hazy, late nights. Play it loud. Play it long. Just play it, over and over. Fin.

Available direct from the label