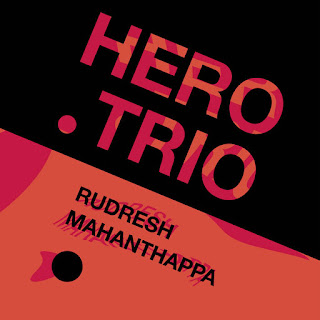 Hey, before I forget, kudos to Whirlwind; a label that has embraced and advanced the English scene while transcending geography to deliver top-notch music. Like, for example, Rudresh Mahanthappa’s Hero Trio release.

Hero Trio is both a striking statement of Mahanthappa lays out his own vision in the loner notes - “I have always wanted to record in the powerful yet intimate trio format. It would be an incomplete venture without somehow celebrating the quintessential saxophone trio work of Sonny Rollins, Lee Konitz, and Ornette Coleman. Outside of the jazz world, I first saw both Johnny Cash and Stevie Wonder on Sesame Street as a child and have always found their work to be beautiful, humorous, pensive, and utterly joyful. They have played such a strong role in helping me to look beyond the illusory boundaries of genre towards seeing music as a magical force that binds humanity. With this album, we seek to endorse and spread that message widely.”

All of the material is presented in Mahanthappa’s characteristically original arrangements, and to approach them with the greatest degree of freedom and spontaneity he chose to record in trio format, enlisting the talents of long-time associates François Moutin on bass and Rudy Royston on drums.

“Red Cross” opens with the clarion call of a keening alto, rumbling rhythms, trading off returning to Mahanthappa’s tart alto. They play the melody three different ways but always manage to find the energy and nuance in each turn. The notes mention “Red Cross” was one of the first Charlie Parker tunes the altoist ever learned. In listening to it one can imagine the years of work put into understanding it and playing it; that only burnishes the legacy and of its author as well as the chops of this trio.

Next is a version of the Stevie Wonder tune “Overjoyed” arranged by Danilo Perez, a former duo partner of Mahanthappa. Tone is still sharp although the tempo’s foot is slightly off the gas pedal from the opener. Mahanthappa used Perez’ arrangement for its variety of meters and complexities that allows the music to breath. Mountain has a nice feature here, never losing sight of the tune but offering a few rhythmic twists.

What’s a Hero Trio without a nod to Coltrane? Mahanthappa combines Parker’s “Barbados” with Coltrane’s “26-2” in one track. And pardon the pun, a whirlwind of sound. Moutin gets a tasty bass solo early then Mahanthappa harkens back to Bird’s speed and alacrity as Royston keeps what sound to me like several times by pounding away with dexterity. The production has good separation as not to sound crowded; each voice stands out but doesn’t drown out the others. The three shift tempos to dig in the out section as if they found yet another vein of gold to mine.

'I Can’t Get Started' replicates that approach the trio have developed in live shows where the three of them create a spontaneously improvised groove for Mahanthappa to take in any direction. In a nod to Sonny Rollins and Benny Carter this ballad illustrates the tones and tempos of the trio’s considerate interplay.

‘The Windup’ is from Keith Jarret’s ‘Belonging’, one of Mahanthappa’s favorite ever albums – “A ridiculously awesome album. I also liked the challenge of recording Jarrett with a piano less group - if you can do that, then you can do anything.” And they do it well, sans piano, delivering a faithful rendition all things considered which is cool with me. Like any good homage recalls the skill and influence of the honored, this song stirred my jazz novice memories of Keith Jarrett. His vocalizing isn’t my cup of tea, but he always found a groove and this tune typifies and reminds me of that. It has a really nice 70’s ECM vibe.

June Carter Cash wrote ‘Ring of Fire’ for her husband Johnny, and the tune connects Mahanthappa with his Colorado childhood. "Like Dolly Parton, when you take a closer look at what they did compositionally you realize that it has a conversational ﬂow, with odd length phrases and extra bars here and there, and I wanted to capture that freedom." Maybe a hint to Rollins’ Way Out West? Like the original version this cut t has that same jaunty bounce, an old time feel, and shuffle country beat that keeps it fresh and not patronizing.

Lee Konitz’ album “Motion” helped inspired the trio’s take on ‘I’ll Remember April’ but like the rest of the record it is used as a starting point and not a dead end. I found it to be something of a deviation in that for me, it inspires me to play “air sax, “air bass” and “air drums”. Yup, guess I’m a jazz-nerd.

‘Sadness’, ah the influence of Ornette...with Moffett and Izenson, the bowed bass, the blues cry of Mahanthappa’s horn, the burbling of Royston’s drums seemingly pushing the sonic boundaries of the music. Its reflective and deep, but never despondent.

Mahanthappa wanted to include some lesser known Parker tunes and ‘Dewey Square’ was a last-minute spontaneous addition in the studio. It works, sounding like a muscle-memory exercise (in a good way, showing how the music is imbedded in us) or the tight tune a band plays at the end of the set.

Music can come from and be played practically anywhere. Playing tunes from Charlie Parker to Stevie Wonder to June Carter Cash to Keith Jarrett may seem like bouncing all over the place. But this trio’s laser focus explores and illuminates the depth and breadth of the music; it packs a wallop and a groove all the while paying homage the energy, art and soul of the music and its progenitors.