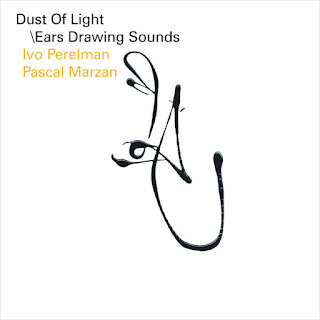 I have written with Ivo Perelman for a while now and one thing I know about him is his love for the guitar - all its sounds, intricacies and variations. Ivo studied nylon string guitar early in his career and it is no surprise that he has been working with 3 guitarists on new CDs. The first I am reviewing is 'Dust Of LIght/Ears Drawing Sound' which is the result of a coincidental meeting between French guitarist Pascal Marzan and Perelman.

In a remarkable mirroring of lives Marzan learned and mastered classical acoustic guitar later in life and studied under the same Brazilian composer - Heitor Villa- Lobos who tutored Ivo on the instrument when he was a young musician.

Marzan worked with legendary British improvisers including guitarist John Russell, violinist Phil Wachsmann and clarinet player Alex Ward, as well as playing classical music. He decided recently to completely overhaul his repertoire and playing and bought a new ten strings classical guitar built to the requirements of the legendary virtuoso Narciso Yepes. He then tuned each string with an interval of a third of a tone from the next string in order to develop microtonality. It is not surprising that Ivo was captured by this idea as one of his musical collaborators, Mat Maneri, who learned the microtonal philosophy from his father, Joe Maneri. The Maneri's sound was captured on a couple of recordings for ECM.

When Pascal and Perelman met at a London gig and there was instant connection. Pascal's tuning meant that he can play in sixths of tones due to the one and a half tone spacing of the guitar frets whilst two different scales of thirds of tones as well as “normal” notes still being available. The complexity is astounding but simplified in the hands of a true virtuoso.

There are 12 tracks here and each one displays a little of the intimate relationship between the instruments and players. In 'Hot Dust-Obscured Galleries' Perelman has to play at times so pianissimo and even then the listener finds themselves straining to catch the whispered intonations of the guitar, whilst in 'River Mirroring A Smiling Moon' there is a playfulness from both instruments and the guitar occasionally rises into the pauses left by the sax - those important but brief pauses.

'Bees And Squirrels In The Garden/Two Bees At My Window' is busy, buzzy and energy driven, the two instruments cascading and rising in harmony before diverging, creating a sense of coming and going, hovering and flying, like the mating dance of butterflies or bees. Perelman's altissimo creates an uncanny bee-like sound with the thrumming guitar sounding remarkably hive-like. 'Sun Through Closed Eyelids' is mellifluous, flowing and coloured with a sense of lightness, with a lovely descent part way through which evolves naturally on both sides. 'Ears Drawing Sound' is short and explorative, whilst 'Dusts Of Light/Dancing In Shadowed Forests' and 'Swinging Swallows' are apposite mood swings with the latter somehow distilling down to a narrow trench of musical variation on both sides - again, completely unplanned - it just happens but the bandwidth of notes is narrow, the intricacies wide. 'Conversation In The Wind/Conversation With The Wind is lower, darker and rooted in those dark corners we sometimes find and open, thoughts disparate and flickering into view - the listener gets glimpses of ideas before they vanish like whirls of mist, batted out of existence by a sudden flicker of aggression form the sax.

'Calling At The Doorway' is lighter, high and sweet whilst 'High Mountain Walk' is powerful, atmospheric and travels different musical pathways. There is a touch of Sharrock, a touch of Ayler in the players respectively and it works well as the conversation goes from competing to harmony on the spin of a note.

'Reflections' is a lot of pipe work from Perelman over light guitar and 'Mysterious Bells' closes out the album in a blaze of intuitive playing from both players.

Responding to the intricacy shown on the guitar, Perelman challenges his own playing by entering in micro tones above or below the guitar 'pure' notes which involves meticulous adjustment of his reed, mouthpiece, embouchure and air flow. Just occasionally there is a microtone of difference which catches on the ear as it is so difficult to place but this is rare. Perhaps hardest for Perelman on this recording is the fact that to enhance the guitar, he has to play dulce, softly and quietly at times in order to allow the microtonality of the guitar intervals to be heard and felt.

At times the two instruments appear to converge so that there is a sense of a chimera, a hybrid and perhaps a re-birth, if that was possible, of Perleman's playing.

There are moments of eerie reverberation which reveals the frail nature of the Spanish guitar wood in the guitar's frame, comprising as is does of small pieces of wood held together. Pascal brings from the guitar a life-like change of mood, veering from effervescence to gentle, sensual strokes and touches using hands, nails. He also creates wildly rampant arpeggios. The sensuality and engagement derived from the guitar means Perelman has to commit to utter control of his sax, something which is always a facet of his playing but here in the soft intricacies, it is a vulnerability which would lay bare any tiny deviation from perfection. Perelman rises to the challenge admirably and delivers yet another factor of his playing. There are nods to historical styles of Ayler and Webster but also a modernistic approach to delivery which is appealing to a wide section of listeners.

This is a recording which invites close listening because on some of the tracks it feels like Perelman solo work but you need to listen to the gentle, intricate, delicate pickery going on behind and then that sound somehow comes forward. Perelman achieves a quietude at times which allows the strings to come forth and dominate but not often. More, the music is a oneness yet a due performance which is complementary and enjoyable.

This is improvisation in the true sense - two musicians listening, engaged, challenging, rising, falling away seemingly effortlessly yet the expertise is such that anyone copying this would find it nigh on impossible. The variety of musical forms created in the spur of the moment is amazing and strangely lyrical and earthy.