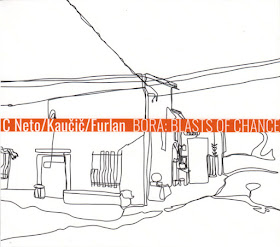 Zlatko Kaučič’s flexibility has lead him to a vast, eclectic and diverse discography. He seems to move freely and quite easily from improvisation to free jazz, but always also capable of translating jazz standards into something more contemporary. By just counting the amount of releases with Klopotec, there must be a bond here which is not a fact we should ignore. Having the opportunity and, mostly, the freedom to record your music has become a privilege nowadays. The later applies for drummer Gal Furlan who is, even though I’m not aware of his recordings, slowly building a strong bond with the Slovenian label. I was also unaware of the, small to be fair, discography of saxophonist Neto.

The three guys consist of the improvising trio of Bora and this CD is their first recorded output together. It was recorded live and improvised on January of 2020. It seems a little bit like it was much longer that it actually is: musics, especially those below the radar, that were performed live before the covid dystopia. On Blasts Of Chance Kaucic is mostly on zither, while Neto plays saxophones and whistles and Furlan is on drums and percussion.

The CD consists two tracks, 'Bora 1' and 'Bora 2', with the former being much longer. It’s also the core of the recording I believe. I should be honest and fair to write that, for my ears at least, Kaucic’s zither contribution isn’t working. It allows a certain ambient feel, or even a droney timbre that isn’t quite on the same path with the purely acoustic sounds of the wind instruments and the minimalist approach on the drums by Furlan. But do not get me wrong here: this is, at least in a big part of it, a matter of personal taste. I pretty much enjoyed (and asked for more) the playing and the interaction between the sax and the drums. Neto’s contribution steal the spotlight here. His approach is also minimal but also concentrated on his fellow musicians playing. His playing is on a totally give and take basis.

Even though the zither sounds are not exactly working for me, the overall musical concept of the three is exhilarating in its improvisational ethos. I wouldn’t call this music jazz per se. But what is jazz anymore and who cares to define it? Ah, yes, some people still do because they want to capitalize out of it. Thankfully this is not the case of this trio. Not for Klopotec as well.