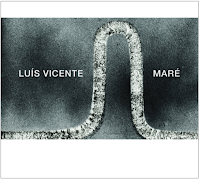 Bear with me for a long literary intro. The album - a solo trumpet performance by Luis Vicente - is accompanied, inspired or explained by a poem by Portuguese author Fernando Pessoa (1888-1935). It is part of Pessoa's "Fausto", based on the famous tragedy by Goethe. In contrast to Goethe's work, Pessoa's work consists of monologues and dialogues. This poem comes from "Dialogues In The Night".

In English translation, it could be the following:

Ah, everything is symbol and analogy!
The wind that blows and the cold nights
Are something other than night and wind -
Shadows of Life and Thought.
Everything we see is something else.
The sweeping tide, the raging tide,
Is the echo of another tide that flows
Where the world is really real.
All we have is forgetfulness.
The cold night and the wind's blowing
Are shadows of the hands whose motions
Are the mother illusion of this illusion".

Interestingly enough, Brazilian scholar and literature professor Rodrigo Alexandre de Carvalho Xavier comes with a different translation but citing the same source.
Ah, everything is symbol and analogy!
The wind that passes, the night that cools
Are other things yonder the night and the wind –
Shadows of life and thought.
Everything we see is another thing.
The vast tide, the eager tide,
It is the echo of another tide that is
Where is real the world which is.
All we have is oblivion.
The cold night, the fleeting wind
Are shadows of hands whose gestures are
The ‘mother-illusion’ of this illusion.
In his article "Fernando Pessoa’s Fausto and the concept of Subjective Tragedy", he adds the following statement in his analysis of the poem:

We have seen that the sensation has two symmetrical elements, ‘the sensation of the outside world’ and ‘the abstract phenomenon of consciousness’. These elements define two directions or dimensions of feeling: on one hand, the object and the objective sensations, on the other, the subjective state and subjective associations linked to that object. In sum, the outer face and the inner face of sensation. Between these two poles, and from them, art must produce another type of sensation, ‘abstract sensation’ (Gil, 1987, p .43, added)

We know Luis Vicente. We enjoyed and reviewed many of his recent works in various bands and ensembles. This solo performance was recorded Live on 17th November 2017 at Convento de Santa Clara a Nova as part of Anozero - Bienal de Arte Contemporânea de Coimbra, a wonderful place to give a solo concert.

His music offers the same sentiment that reality is flowing like sand between our fingers. His trumpet sounds oscillate between the stretched solitary sound of a fog horn over a sea at night, and the short suppressed sonic bursts of emotions struggling to get transformed into meaning. The whole ambiguity of the poem is to be found in the music. The sound is just the sound, a sign, a metaphor, an analogy, a symbol of deeper layers of reality, of a more subjective inner reality that the objective reality of the sound can only refer to. At the same time the lone trumpet resonates and echoes in the open space of the monastery, sounds bouncing back against hard walls, with the musician listening back in an unexpected dialogue.

The title - Maré - specifically refers to these three lines:

The sweeping tide, the raging tide,
Is the echo of another tide that flows
Where the world is really real.
I am not sure whether the concept of using the poem preceded the concert, or whether it was later selected because it matched with the mood, but you can feel this mood in the music. It creates the imagery, the scenery of empty space, the sea with all its vastness and turbulence and the uncertainty and sadness of sailors who do not return home. The deeper reality however is the one that makes us feel all the same when hearing the sounds: the sadness, the solitude, the melancholy, the beauty. It is abstract in its reductive simplicity. It is concrete is the physical aspect of emotions turned into sound. It is pure and authentic throughout.
Luis Vicente is a master. His technique is as astonishing as his musical vision. His tone is one of exaltation, of refined pain and sentiment. He can go to sustained high pitches, waiting for the walls to answer back, with improvisational lyricism full of variation and carefully crafted tension.
While the trumpet cherishes the open space and fills it completely, voluminous and with a grand and majestic presence, it is equally intimate, personal, small and human. And this may be the most powerful aspect in this musical narrative, with its shifting sonorities reflecting as many contrasting emotions "where the world is really real", where 'abstract sensations' exist.
If any reference is needed, the masterpiece of Nassim Maalouf - "Improvisations Orientales" - comes to mind, and that says a lot.
Don't miss this album.