Legendary German, Seoul-based reeds-multi-instrumentalist, multimedia artist and political activist Alfred 23 Harth was one of the first artists to be signed on the fresh ECM label (Just Music was the second album of ECM catalog, released in 1970), back in the late sixties; he formed a duo with fellow German composer, music-theater director Heiner Goebbels; founded in the eighties the seminal avant-rock bands Cassiber (with Goebbels and drummer Chris Cutler) and Gestalt et Jive (with keyboards player Steve Beresford and drummer Anton Fier), performed with Peter Brötzmann, John Zorn, Sonny Sharrock, Phil Minton, and Otomo Yoshihide, and composed works inspired by authors William S. Burroughs and Doris Lessing.

Throughout his more than five decades of music-making, Harth acted as a peacemaker between eclectic, contrasting genres, cultivated collaborations with like-minded creative musicians from all around the world, and always embraced the unpredictable and provocative. 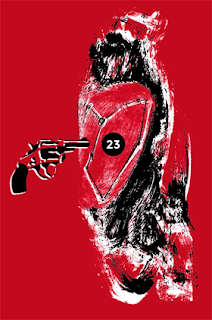 Harth likes to provoke his audiences and listeners and Kirschblüten mit verstecktem Sprengstoff (in English: Cherry blossoms with hidden explosives) does exactly that. Harth begins with a Hegelian explanation (inspired by Georg Hegel’s 'Lecture on Aesthetics') about the cover art, designed by German writer-artist Kai Pohl, and showing a revolver aiming at a swinging arm of a mysterious figure, with a Sagittarius constellation on it. The arm looks like it has already been hit - or exploded - by a few bullets. The lines on that arm illustrate the symbol of the bow, but without its arrows, and according to Harth, express the Amor symbolism, that can mean that the revolver is also a lover. The number 23 refers to Harth himself and was adopted more than three decades ago into his name, called in short as A23H.

The cover story already informs about the spirit of the music - complex, volatile, and erratic, but also en electric-poetic compound that succeeds to blend elements of free jazz, prog-rock, free improvisation, theater, speeches in German and Korean, and philosophy into a greater whole, with great imagination and thanks to Harth’s singular personality and leadership that defies repressive genre or style convention. Kirschblüten mit verstecktem Sprengstoff was recorded live at the DOM club in Moscow in October 2018 and features Harth on assorted reeds, vocal, and trombone con arco, guitarist Nicola L. Hein, synthesizer player Marcel Daemgen and drummer Jörg Fischer (Daemgen and Fischer collaborated before with Harth on Confucius Tarif Reduit, sporeprint, 2015). All share the credit for the eight compositions.

The pieces’ titles are inspired too by the philosophical introduction. Kirschblüten mit verstecktem Sprengstoff, like many of Harth’s bands and composition, is an intense spectacle that is better experienced live rather than at home. The interplay is tight, dense, and powerful, driven by the manic gestures of Harth and Hein, and the whole quartet is playing as totally committed and possessed by Harth’s subversive vision. This album suggests a mind-expanding glimpse into the restless minds of four sonic scientists as they prepare their potent potions. 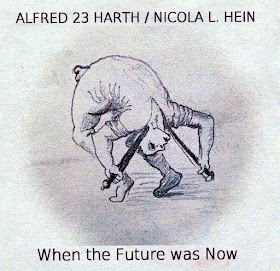 When The Future Was Now was recorded at the Pit Inn Studio in Tokyo in July 2017 and features Harth exclusively on clarinets alongside guitarist Hein. The title refers to the name of an exhibition at the Tate Liverpool from 2011 by pioneering Korean artist and composer Nam June Paik (1932–2006), who coined the phrase: “the future is now”. Harth drew the cover back in 1975 when he was staying in New York, and this album is released as a limited-edition of 400 CDR’s.

The seven pieces are free-improvised but according to Harth all have “a slight balladesque flavor here and there and in their pseudo-harmonic way reminds us of earlier jazz chamber combinations from the sixties and seventies”. Harth wanted to stress this retro spirit with flower-power kind of titles like John Lennon-Yoko Ono’s “War Is Over, If You Want”.

Don’t expect a balladesque tribute to the work of Jimmy Guiffre with Jim Hall. These duets owe much more to the duets of Derek Bailey with tony Coe or Anthony Braxton, stimulated by the hyper-urban and humid Tokyo of summer 2017. Harth incorporates into “Life Is A Tape” incorporates exotic, Far-Eastern colors, and sounds innocent and melodic on the brief “1-9-6-7”, and “This Is Not Here Or There, Not Now Or Tomorrow” and on the most beautiful “War Is Over If You Want”, but adds more urgent and raw gestures here and there. Hein is the wild card here, always unpredictable and inventive, expanding the timbral range of his custom-built electric guitar with assorted objects and effects and often turns it into an alien, percussive sound generator or an instrument that produces evocative soundscapes. 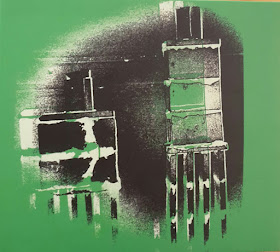 Harth teams on Malcha with old comrades. Belgian vocalist-pianist-percussionist Nicole Van Den Plas has played with him back in the seventies in the trio E.M.T. (with Swedish drummer-accordionist Sven-Åke Johansson); German guitarist-percussionist Wolfgang Seidel mastered few albums of Harth, include one by Gestalt et Jive (the recently released 1985 Neowise, Al Maslakh, donated by Harth to the victims of the Beirut Explosion pf August 4th, 2020); and Harth played with Italian drummer Fabrizio Spera in the 7K Oaks band. Harth plays on tenor and soprano saxes, the Korean dojirak, and employs his voice.

This international quartet recorded its album at ExRotaprint Studio in Berlin in November 2015 but was desperate for a title that would define its sound. Harth came up with Malcha, a Korean powdered green tea that guarantees to wake you up, frothed with a bamboo whisk like cappuccino. Harth also found names for the pieces, connecting them to the story of the old decaying palace in Delhi India, Malcha Mahal, where the last descendants of the Persian dynasty that ruled the Oudh Kingdom lived until the mid-19th century.

The spirit of Malcha is surprisingly patient and introspective, informed by the minimalist studio manipulations that incorporate cleverly subtle radio and field recordings, the loose, ceremonial pulses, and most of all, the wordless, enigmatic vocalizations of Van Den Plas. Harth injects into these layered soundscapes a dimension of restless, chaotic urgency, but often his lone voice drowns within the overall, sparse atmospheric envelope.