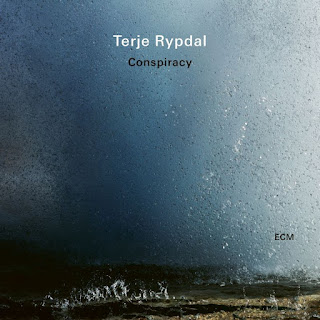 By Paul Acquaro
This may be the Terje Rypdal album I have been waiting for, how did they know? Conspiracy is the first since the Norwegian guitarist's 2013 classical album Melodic Warrior (with the Hilliard Ensemble and Bruckner Orchester Linz, which never really struck a chord with me), and suffice to say, I am quite happy to hear Rypdal back in the small group territory, especially continuing to work with keyboardist Ståle Storløkken (of Elephant9 and SuperSilent fame).
The album begins with the atmospheric "As if the Ghost Was ... Me," in which all the hallmarks of Rypdal's best works are present. A brisk, light drum pattern from Pål Thowsen is then overlaid with a laconic, overdriven guitar line. Storløkken adds a touch of harmonic accompaniment, and Endre Hareide Hallre's bass provides an elastic tension. By the end of the song, the group is gliding effortlessly.

The build up continues through the second track "What Was I Thinking," which features a haunting and brittle melody along with some denser moments, until hitting a gut punch of a climax during the absolutely searing title track. On 'Conspiracy,' Storløkken's organ growls and vibrates while Rypdal's distinct keening guitar tone pushes the sky ever a bit higher. This is followed by the prominent electric bass work on "By His Lonesome." Sometimes almost seeming to quote "With a Little Help From my Friends", Hallre's clear, round, warm tone, delivers a powerful, melodic thread which the others decorate and enhance through subtle interactions and choice emphasis. Rypdal's shadowing of the melody is particular effecting, like pin pricks of emotion contrasting against the tune's icy surface.

The penultimate track, 'Baby Beautiful,' begins with a gentle sway, the energy between Rypdal and Storløkken, pushing to and fro until about two minutes in when the guitarist starts digging into his rock-and-roll bag-of-tricks, blues lines and crispy flicks of distorted flames lay tastefully atop the keyboard's subtly lush accompaniment. A hushed set of solos follow from Hallre and Storløkken, both are accessible and inviting. Throughout Thowsen keeps the pulse moving, but restrained, making each evolution, each new layer, more anticipatory. The eight minutes spent in this cathedral of sound is worth every moment.

The album ends with the short 'Dawn', which is mostly a humming drone, with drops of musical condensation in the form of cymbals hits. A rather quick ending to a gorgeous album. If you're a fan of Rypdal's work there is little not to like about Conspiracy.
Paul on Thursday, October 01, 2020
Share