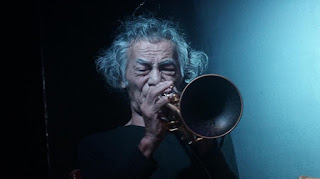 The great Japanese trumpeter Toshinori Kondo passed away peacefully on the night of Saturday, October 17, 2020, his sons Kuta and Yota informed on his website. Kondō was one of the prominent, pioneers of the free-jazz and free-improv in the Japanese scene, but as one of the hippest and coolest musicians around his musical tastes knew no limits. He began his musical career in the mid-seventies with English theater and film director Peter Brook and soon joined pianist Yosuke Yamashita.

Kondō relocated to New York in 1978 and there he assimilated quickly with the downtown, free-improv scene, playing alongside Bill Laswell, John Zorn, Henry Kaiser, Eugene Chadbourne, Tom Cora, and Andrea Centazzo. There he came up with an electric pickup for the trumpet, inserted into the shank’s of his trumpet’s mouthpiece, rather in the front of the bell, so he could hear himself among the massive sonic commotion his comrades were making, and allowing himself to crank up the volume but also to produce an imaginative array of unworldly sounds. “Most trumpet players think the trumpet is a musical instrument to make sound with breathing”, Kondō said in an interview with Japan Times, “but I found it) is a musical instrument to express breathing.”

Soon Kondō began to solidify working relations with European free-improv musicians and later moved to Amsterdam in 1993. The list of his European comrades includes such innovative improvisers as Derek Bailey, Peter Kowald, Tristan Honsinger, Han Bennink, Paul Lovens, Paul Lytton, and his most important colleague, Peter Brötzmann. With Brötzmann he founded one of the best free-jazz meets free-improv bands of the nineties, the post-Ayler quartet Die Like A Dog (with double bass player William Parker and drummer Hamid Drake), and its incarnation a decade later, Hairy Bones (with drummer Paal Nilssen-Love and electric bass player Massimo Pupillo), and continued to collaborate with Brötzmann in different formats throughout the years.

But Kondō wanted to explore more, always asking himself what’s next? He began a series of site-related, meditative solo improvisations in 1993 titled 'Blow the Earth', first in the Israeli Negev desert and later in Peru’s Machu Picchu, the Ladakh Himalaya region in India, and different sites in Japan (NHK documentary film about this project led to credit-card commercials and co-starring in popular Japanese TV dramas). In 1984 he founded his Japanese fusion band Kondō IMA that hosted Ryuichi Sakamoto , Kazumi Watanabe, and many others, and kept working with this band until last year (its last album Typhoon 19 (LIVE) was released earlier this year). Kondō embraced hip-hop and collaborated with Japanese DJ Krush, recorded with the Dalai Lama (and Laswell, Life, space, Death, Meta, 2001). He even recorded a set of standards recently (You Don't Know What Love Is (Toshinori Kondō Plays Standards), Plankton, 2015), and during the pandemic lockdown he released on his Bandcamp page a series of solo recordings envisioning a world 'Beyond Corona.'

Kondō disclosed a typical insight and advice in his interview with Japan Times. “Listening to music is like making love on the bed. Almost the same. Which means for musicians, for club owners, they have to set up the best sound situation for lovers”. And: “I really want to say to younger musicians in the world: ‘Fuck the last century’s music. You guys should make this century’s music”.