Flautist and saxophonist Lao Dan transgresses Chinese folk-tinged free jazz into the realm of noise and punk, such is the spirit and energy of his playing. His sonic lineage might include Paul Flaherty, Wally Shoup, or Steve Baczkowski, the first with which he recorded Live At Willimantic Records a couple years ago. I cover a fiery quartet and saxophone solo, though this year he has also released a smoother, quieter solo featuring more flute in The Song of the Uninhabited Island and a more traditional-tinged duo in 互念暗语 Hu Nian An Yu with Li Daiguo, recorded at the same festival as Burning Bookshop II. 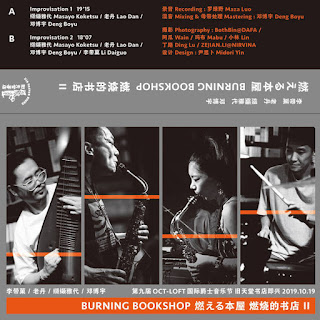 Burning Bookshop II is the successor to the freewheeling frenzy of the first Burning Bookshop , which also featured Japanese and Chinese improvisers playing the Old Heaven bookstore during the OCT-LOFT festival, specifically Yosuke Yamashita’s quartet (minus the pianist) and Lao and Deng. Here, Masayo Koketsu (alto sax) joins Lao (alto sax and dizi) and Deng (drums), with Li (pipa) hopping in for the second half of the 37-minute set. Deng and Lao are frequent collaborators, playing together as Red Scarf and on Crossing A River By Rope with John McCowen, Theresa Wong, and Li Xing. As are Lao and Li, between the aforementioned Hu Nian An Yu and 奔波灞与灞波奔在旧天堂. Koketsu has not previously recorded with the players here, but she did just release Japan Suite with François Carrier, Daisuke Fuwa, and Takashi Itani this year.

Koketsu and Lao begin the set with a prologue, alternating solos while the other does a circular flutter. There’s a few squeals, hinting the noise to come, and there’s a moment of total resonance with each other. Then the drums hit. The crowd starts hollering. And the freak out doesn’t stop until “Improvisation 1” ends. Deng’s style is an octopus-armed, heavy-handed carpet bombing of hits that sometimes locks into a rock groove, a motorik beat, a club beat. Koketsu and Lao’s twin snakes wail and whoop, winding higher and higher until they lock into a tune with Deng, often choosing romping carnivalesque motifs. There’s an energy here I’ve not heard in some time, a sentiment echoed by the elated crowd. It’s capital F J free jazz but it’s not stale. One of the most infectiously exhilarating tracks I’ve heard this year thus far.

“Improvisation 2” meanders a bit at first, with greater folk leanings, beginning with Lao on dizi with trance-induced voicings, a detuned warped pipa from Li, and Koketsu’s airy alto melodies. The crowd goes wild again as Lao switches back to alto and Deng’s drums kick in. This time, the group noodles less, often flitting directly from groove to groove, almost sounding more like collaged pop than improv at times, with a particularly awesome moment of pipa shredding that nearly sounds like surf guitar tremolo over Deng’s rock beat. Similar but less concise than the first track. But the whole set is wild and well worth hearing.

Burning Bookshop II is available on cassette and digitally. 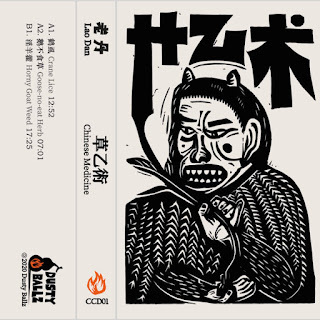 Chinese Medicine is also 37 minutes, though across three tracks, and features Lao on tenor sax, an instrument he’s rarely if ever recorded with, and zheng, a Chinese zither which he chooses to play simultaneously with his feet. His tenor is janus-faced, alternately tea kettle squeals, petulant buzzing flies, and grass-blade whistling juxtaposed with soulful melodies ribbed by smoky, raspy vibrato. Some of his skronk might sound like one of Steve Lacy’s ducks, though on a particularly pinchy day. Lao peppers in overblows, honks, slap tonguing, key clicks, and hollers. And zheng, which sees occasional solo interludes but is often strummed, plucked, and banged while playing saxophone. It’s a melange of folk, jazz, and noise, a crash of eastern and western musics. Fun and worthwhile, especially for his use of instruments he’s yet to record with, though there’s a certain momentum missing here that’s often present in his ensemble recordings.

Chinese Medicine is available on cassette and digitally.