Dancing in Times of Plague (IV)

Japanese pianist Satoko Fujii and trumpeter Natsuki Tamura are both very eclectic musicians, aggregators of existing genres and creators of new ones. They play in a dozen or even more self-created ensembles releasing prolifically and performing on more than 100 albums so far.

As husband and wife, their most special format is the piano and trumpet duo. The current corona crisis forced them into lockdown in Japan, and resulted in a few more duo releases this year, the first ones since "Kisaragi" in 2017. Luckily for fans they also recorded several confinement concerts in their music room at home, available for viewing on Facebook (including a fun moment when they change instruments ... and luckily only for ten seconds).

Both also released solo albums. More on those later. 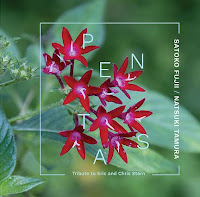 But let's start with the duo album that was actually recorded before the pandemic, on November 19, 2019 at the DTS Studio in Kraków. This is their second album on the Polish Not Two label, and we reviewed the first one shortly after the creation of this blog in 2007, by coincidence also called "In Krakow In November".
Both Fujii and Tamura alternate as the composers of the short duets they perform here. It is fascinating to hear them play: this is not jazz, this is not classical music, or modern contemporary ... it is their own brand. Clear tones, bright music. They focus a lot on the compositional structure of the pieces and the challenge of the interplay. The first track "Not Together", shows how playful and smart that can be, with the trumpet playing staccato notes either on the beat or deliberately just missing it, resulting in unisono and discordant moments, with the central part only piano - hesitant, then confident - inviting the trumpet back in for the last minute. The second track, "Pentas", is more emotional, led by Tamura, wonderfully developing some heartfelt theme into a darker and somber territory and back.
Both musicians like contrasts between dramatic effects in the development of compositions versus the carefully crafted and more light-hearted moments. "Rising" is slow and dark, "Renovation" more playful while "Circle" is more expansive. Even if some moments are composed and the structures planned, there is still room for improvisation, and the incredible interaction of two artists who trust each other's skills and anticipate changes is remarkable.
The music is smart, inventive, compelling and a wonderful treat in these sour times. Chamber music at its best, regardless of genre or even century.
This is their seventh album as a duo. The album is dedicated to Eric and Chris Stern. Eric was a music fan, a person who made connections between foreign artists and the New York scene, who passed away after Fujii's and Tamura's concert in New York. Eric was also a contributor to this blog. We are grateful to Fujii and Tamura for this wonderful tribute to him and his wife. 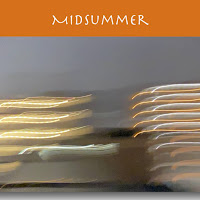 Then comes the lockdown. They are literally locked up together at home in Japan. They perform on Facebook. They improvise. "Midsummer" is the result of such an improvisation. We get nine tracks with an obviously much more open structure and room for development. No need for anchor points to fall back on as with composed pieces. Despite this, both artists manage to create interesting storylines for each piece, with its own inherent logic and narrative.
For instance, the second track "Kata Kata" could be the soundtrack of a horror movie, with Tamura's trumpet sounds creating a haunting atmosphere.
The music is nervous and intense raw, fierce, less complicated because of its free improvisation, with distorted trumpet sounds without clarity - Tamura is a master at creating suppressed multiphonics in stark contrast to the clarity of his tone at other moments, and sometimes wild piano excursions including some activity on the inside of the piano - a rarity for Fujii - but fascinating to hear it evolve and change. This is the music of turmoil, full of internal dynamics that shift and change without structure, full of energy and agitation.
Despite these moments of distress, they don't lose their sense of humour (as in "Morse Code" which starts like single note piano tones played at different lengths).
A lockdown album. Many of us will recognise the emotion.
Listen and download from Bandcamp.
Natsuki Tamura & Satoko Fujii - Keshin (Self, 2020) **** 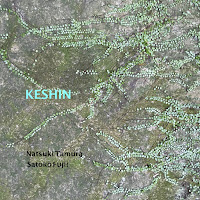 The duo describe this album as such: "This is real DIY recording, recorded by ourselves at our small music room and mixed by ourselves". The album was recorded on November 1 and 2, so at the beginning of this month and released on the 6th.
In contrast to "Midsummer", this album is clearly composed, resulting in the known but still stellar interplay between two musical soulmates whose art is as usual almost cinematic in nature. The first track "Busy Day" makes you see a whole bunch of nervous activity, running around and multitasking. The fact that it has been delivered without any post production increases the freshness and the spontaneity of the work, and even increases the admiration for their technical skills. But as usual they balance between playfulness and more solemn pieces like "Drop", which moves deeper into emotional territory, and even more meditative with the slow "Dreamer". "Three Scenes" again accentuates the almost visual aspect of their art, a little capsule of story-telling with a plot unfolding before your ears, with a calm environment turning into intensity before finding its resolution. "Sparrow Dance" ends the album, offering again a more lively and playful piece, that bookends an album that is otherwise more contained and sensitive.

Listen and download from Bandcamp.
It is nice to hear that two artists like Fujii and Tamura whose sound is recognizable from a distance, can still be so creative as to release three albums within the limited confines of two instruments (and one room) that are still distinctive in terms of stylistic approach, with an almost fully composed and carefully crafted album, an improvised second one that is more exploratory and anguished, to be followed by a calmer and more meditative album.
Well, I can recommend all three of them. Would we have received these great albums without the lockdown? The first one for sure, the two other ones possibly not. Some good still comes out of the pandemic.
Stef on Wednesday, November 18, 2020
Share