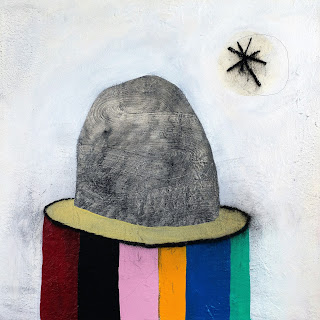 Sax player James Allsop and drummer Will Glaser have released New River Ramble. Recorded in London in August it is improvised music of three tracks. 'The Cosmic Serpent', 'Wet Weather Special' and 'Paul and The Second City Streamer', the last track a dedication to sax player Paul Dunmall and drummer Tony Levin.

'Cosmic Serpent' is beautifully atmospheric , introduced by brief cymbal, the succession of cyclical sax phrases, each a variation and each beautifully rounded is underpinned by drums which increase in complexity as the track progresses. The sax responds and we are fairly rapidly engaged in a to and fro between the instruments with the eclectic rhythmic patterns of the drums providing the perfect antidote to the standardised rhythms but varied phonics of the sax. There is such a connection in this piece, the drums almost seeming to listen to the sax as the phrasing is shortened, lengthened and the patterns built. There is complexity on both sides, yet it comes across as such a simple thing because of the deeply connected links which both players spin from. Around half way the sax veers into tuneful diversions which the drums follows, changing patterns and sound levels to match the flowing mood in another example, if any were needed of the almost subliminal connection. The quietude of the stopped sax is interrupted by the drums first slowly and then rapidly picking up the rhythms, pounding out their own deliberate pace before the sax, still quiet and slow, enters again to form a contrasting and mellifluous section. Then the rapid complex final section , echoed in the rhythm changes of the drums and we are done, finished and wrung. An interesting and rather lovely piece.

'Wet Weather Special' is introduced with some long, extended notes, reminiscent of a fog warning from the sax and the intermittent break-ups of the latter ones makes it feel like an electrical disturbance. However, a sense of comfort is introduced as the sax finds ever more intricate combinations of notes, interspersed with helpful lingering on key notes to create an underlying sense of order, a reminder we are in key. The swinging rhythms of the middle section has an almost Eastern tone to it and this is well worked by the drums too with syncopation under the constantly travelling sax line. It seems, the wet weather is gone and replaced by a lighter tone, redolent of the aftermath of a dull, wet weather front and now we are bathed in sun in the calm which follows. A very different essence than the first track but hugely enjoyable.

'Paul and The Second City Steamer' is a track with almost everything. It has rhythm, it has that wonderful touch of loose embouchure which gives sax music a certain additional quality and takes a long time to master and it has again a connection between two musicians which makes good music sound like so many more musicians are inputting. The sax cries from the heart as the drums ease and comfort, the rhythms offset and creating a calming envelope into which the sax eases and journeys. This track builds and builds and just when you think two musicians can't offer more - they do. Glorious.

This is a great listen and serves an intense, engaged , attention full listen or as an accompaniment to tasks which offer little in the way of intrigue but the guarantee is you will find your mind constantly switching back to the music. This is very simply a great recording.