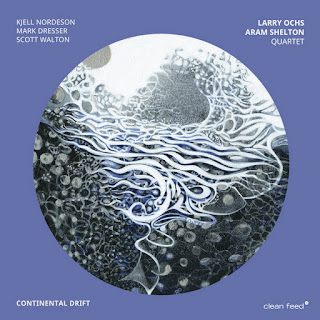 Continental Drift by Ochs-Shelton Quartet asks, “Can a quartet album of different generations be like-minded companions?” By the work of this group with Ochs on tenor and sopranino, Shelton on alto, Kjell Nordeson on drums and Mark Dresser on double-bass for six tracks and Mark Walton on double bass for the balance, ultimately one realizes it's a rhetorical question.

Not immediately accessible but not impenetrable, at times the songs meander or lurch or step up tempo and velocity, but they always have a reason or motivation or goal. This is not a seamless integration and for me that is its best feature. The two horns are not battling but speaking in their own idiom lapping or overlapping, paralleling or contrasting one another as the rhythm section locks in to complement or expand the music, with what the liner notes call “new music with a jazz approach and an avant-garde attitude.” Ochs and Shelton divide the composition duties evenly.

The opener, “Another Night,” by Shelton, starts with the horns dancing like snakes that then give way to a languid bass-drum conversation. Ochs tenor enters at the same, easy gait, like someone just stepped outside to see what’s happening now that the sun has gone down. Shelton and Ochs get back together then trade off on a nice carpet of rhythms from Norderson and Dresser. The dynamics are subtle, even graceful as the tune ends.

“Slat” from Ochs’ pen is up next and like its predecessor takes its time revving up. Horns stammer and stutter, before gaining momentum from Norderson to break into some out playing, again the two horns working individually with a collective purpose. Dresser explores the range of his bass, too, giving the tune a soothing undulating vibe.

Both Ochs and Shelton have experiences in different scenes, from New York to Chicago to San Francisco and even overseas now for Shelton whose groover “Switch” conjures up his time in the Windy City; a little freer, at times but with those locked in rhythms that are one hallmark of Chicago’s contribution to the jazz diaspora.

Mark Walton and Ochs open the latter’s “Continental Drift” with the somber grounding of a bowed bass and the fluttering flickers of Ochs’ horn before Shelton and Nordeson chime in. There’s almost a slight electro-acoustic tone to this piece, which given the leaders’ background in disparate genres is no surprise. It's a music that I’ve come to only later in my jazz wanderings. So, I’m toss around phrases like “sound-sculpting” at my own risk but there is a sense of construction, of building a piece out of sound to my ears. In the context of the album it isn’t a misstep or diversion but another mile-marker on the way.

Anita,” by Shelton slows everything down in a good way, call it an “almost chamber ballad.” Twittering horns and rolling cymbals simply emanate from the speakers and horns begin soliloquies and conversations. It's a spacious tune, allowing the listener to drink deep at the well.

“Strand” by Ochs starts off with some bass and drums and sounds like the Chicago influence is rubbing off in the best way. Ochs tenor ratchets up the heat with a throaty scorch as Nordeson and Dresser manage to support and encourage his playing.

Aram’s “Test Shots” settles into its own groove and sounds as if Shelton is synthesizing the concepts of earlier tracks. This is the sound of a band working at focused purposes rather than cross purposes

Ochs’ sopranino opens his composition, “The Others Dream”, the album’s magnum opus, could be its own release. He flutters and squawks as Nordeson minds his cymbals and kick drums sounding almost like a pianist to my ears. The sounds can be fractured or stuttered but responsive. The artists let the music unfold at its own pace, moving through several phases. Ochs blows some gut-bucket avant-garde, and Shelton contributes his swirls of sound later. Rising and falling seems to be a theme. And while 19 plus minutes can be a challenge coming to it as its own piece may be the best way for one to enter at first.

Each of us carries a history of places, faces, ups and down. And while our experiences are unique, they are common, too: we all have them. Larry Ochs and Aram Shelton Quartet create a space where a variety of experiences mesh to create a new, vibrant listening one. Take your time, work on it, let it work on you.