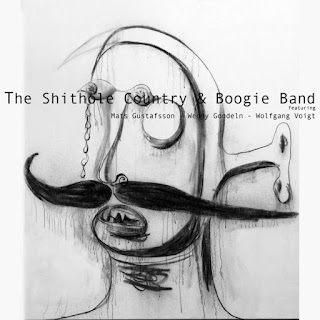 
How can anyone look at that title and not be at least a little curious? Add in a genre busting sonic master blasting blog fave like Mats Gustafsson and the curiosity becomes “I gotta hear this". So what’s it sound like?

First off, other than some brief processed voices there aren't any vocals so this isn't Shockabilly 2020. As for the boogie part, the label's writeup describes this as spasmodic dance music. Wendy Gondeln (otherwise known as visual artist Albert Oehlen) has been pursuing various music projects since 1999, including with Rüdiger Carl, of minimal distorted electronic music to which very raw violin sounds are added. Gustafsson has been friends with Oehlen through his visual art and this project of combining their wildly different musical approaches had been contemplated for a while before Mats was recorded solo by Albert in a gallery in Weidingen, Germany. Then Wendy took that material and started processing and manipulating it, often converting an already ominously projecting sound into something even more so, and adding violin parts and electronic beats. Then they met up in Martin Siewert’s Vienna studio for mixing and mastering, plus Siewert added guitar and laptop guitar parts to “Crowdfunding” and “Sloop”. Finally, Wolfgang Voigt was invited to edit and remix two of the cuts, “Jazz Abstrakt 1.3” and “Gabber Jazz”, giving them an ethereal cinema noir feel.

My first reaction to listening to this was “what the hell is this” and wondering if I was a new Robert Crumb foil in an updated version of Torturing the Saxophone. By Gustafsson’s admission this is very different from what he's done previously, which covers a lot of ground, and he knows some listeners will hate it. But once the initial shock is over the interplay between Gondeln’s unusual violin playing and the processed blats of sound from Mats becomes oddly fascinating as a listener becomes aware that there's a lot going on underneath the strange surface. The eight songs are five minutes or less except for the ten and a half minute “Gabber Jazz” closing cut but in the short spans specific statements are coherently developed.

One of the songs, “Cooler”, takes a structure of a rock song, something like “Roadhouse Blues” from Morrison Hotel, played on a processed organ and staticky rhythms and flanks it with Mats’ intermittent spaciously enhanced baritone blasts on one side and Gondeln’s violin strumming on the other along with other synthesized noise. “Yesterday” sounds like a stripped down to the drums “Right Off” from “Jack Johnson” only with tongue slapped sax bursts, violin sawing with processed vocals and electronics floating through. Those references to other songs might be listener specific and others might hear something very different.

I don't think I've ever gone through such changed attitudes in the course of reviewing something as this. I went from “choosing to review this was a mistake” to “this is better than I initially thought” and ended with “I hope they do another project” about which Gustafsson sounds ready. But for Mats presence I wouldn't have listened to it and still don't know how to adequately describe it other than the label’s “highly conceptual experimental sound art” seems fitting. Reviews by the usual suspects are hard to find, although I suspect something exists behind The Wire’s fortress of solitude fire walls, so others are surely perplexed. But I think Gustafsson, Gondeln and friends have caught lightning in a bottle at least once.