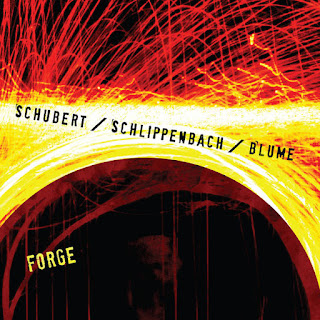 When listening to Alexander von Schlippenbach in a sax-piano-percussion trio format, comparisons with his classic trio with Evan Parker and Paul Lovens are difficult to avoid. Naturally, such a comparison lifts the bar for Frank Schubert (saxes) and Martin Blume (drums). Viewing this ensemble through the lens of Schlippenbach-Parker-Lovens, however, is somewhat inappropriate, as the personal continuities rest solely in the pianist and the similarities in instrumentation are somewhat accidental, as styles and techniques can be so personal and vary so greatly. That stands even when the musicians are working with loosely the same free improv vernacular. (See Colin’s review of some of Schubert and Blume’s other work together here for a review that evades this comparison trap and examines the two musicians more clearly on their own terms.)

On Forge’s two tracks, Merge and Forgin the Work, Schubert swings from colorful sound sheets, to swaggering melodies, to expressionistic abstractions and offers formidable counterparts to Schlippenbach’s vacillations between classical romanticism and cubist amelodicism. Blume, meanwhile, finds his way to unique time-keeping, riding the cymbals and frequently sputtering on the bass drum and snare, but never quite falling into the bebop rhythms with which he so playfully flirts. In doing so, he creates a sense of billowing kineticism in the more energetic movements, and endless rummaging for the perfect clicks and clacks in the more spacious ones. At points, as with the classic trio, the three musicians’ lines entangle like a complex and irregular Nordic interweave. At others, Schlippenbach, or Schubert, or Blume deviates, and drives his bandmates into realms yet unexplored.

Most exciting about this album is the balance between Schubert’s and Blume’s tendencies toward jazz melodies and free jazz cacophony and Schlippenbach’s constant pull towards blockier constructions more common to the virtuosic classical vanguard. This contrast leads to diverging paths, an expanding and contraction of musical directions, and a truly compelling knotting that stylistic purity or an overwrought singlemindedness would simply not allow. It is, in other words, a group effort, and one which rewards the listener with almost an hour of expert improvisation that creates moments of clangorous exuberance, curious muffled clatter, and even enlightened serenity, when everything about this alloyed trio and this album just makes sense.