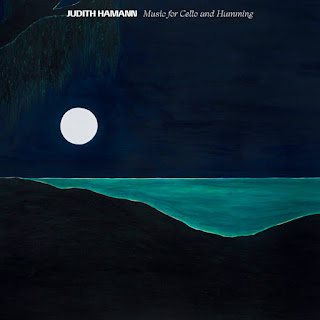 
The solo work is the most reclusive, really difficult, one to write about. When two or more musicians get together to play, in any given instance, there are a few basics the so called reviewer, like me, can rely on. There will be interactions, dialogues, room for each to play solo and the will to collaborate -less ego maybe. But what about the solo work? Are there specific ideas and structures inside the artist’s mind or just a flow (an easy procedure when it’s only you as the participant) of feelings and experiments?

In another post, Judith Hamann offers some insights on her work, the sister albums on the ever expanding eclectic catalogue of Blank Forms, by answering to some questions. But the problem still exists for me, a playful issue indeed, because –guess what- the feelings and insights by listening to this cd might be totally different from what the artist had in mind… Music For Cello and Humming, her first solo release, is a totally personal affair, one that seems, intentionally I believe, to rely purely on her feelings even though not all the tracks are hers.

Humming is a gesture that comes from deep inside and can express feelings of joy and playfulness. It also is very close to children’s singing or just playing with their voice. She uses her voice as an equal to her instrument with a restrained discipline. It follows the overtones of the cello’s timbre giving the feeling to the listener that there’s no lead instrument. Cello and voice follow two parallel paths of the same pace. In this path my ears recognized some remnants of a pop sensibility. While her voice sometimes almost falls below the limit of audibility, it’s the strong feelings evoked by her that stay with you, making this fact quite unclear. Was she shouting or is it my impression?

Music For Cello and Humming is a minimalist work rich in guttural feelings. Most of the tracks are Hamann’s but it also features one track by Sarah Hennies and one by Antony Pateras. But it certainly is the interpretations of, even, other people’s work that justifies the title: this is a solo effort. Even though I’m not familiar with the dynamics of the cello -the energy and effort necessary to achieve something worth listening- while listening to the cd, the struggle is quite clear and audible especially on the last track, which is the longest one. In it’s almost half an hour duration it evolves from a study of intonation into a bowless endurance struggle of repeated phrases and notes. Amazing.

Having worked with important artists up to now, Judith Hamann seems comfortable to be alone against the elephant in the room, which is to assume full responsibility of the recorded output. I believe she has done a wonderful job, offering us an album of warmth that is rarely attributed to experimentalism.