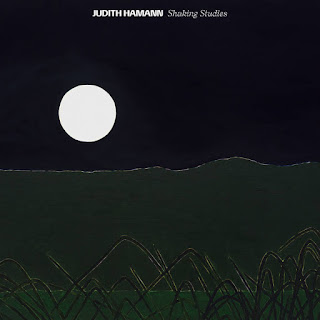 At the atomic level, everything vibrates. Everything sounds. With her series of solo recordings this year, cellist Judith Hamann illuminates a vision in which the waves of all things audible resonate, literally and poetically. The sound of seismographic squiggles and marine waves on days collapse days collapse night. The throbbing organs, purring engines, whirring fans, and resonant rooms and piano body of Peaks. The shaking, tremors, wolf tones, and vibrato spotlighted on Shaking Studies. The peaks and valleys of tape on wheels wherever field recordings appear. The electronic sine waves, oscillators, and synthesizers emerging throughout these recordings. And the omnipresent humming, undulating as sustained, blurring and resonating with the cello thanks to its many shared frequencies with the human voice, particularly well-presented on Music for Cello and Humming. The waves of all these things and more playing together and interacting. Unlike most music playing with waves, this isn’t drone. The sound is sustained enough to synthesize waves, but not restrained. It is evocative, emotive, and moody. And rather than create a morphing, synthesizing polyrhythm of just overtones, Hamann creates one from waves of all scales, sources, and meanings.

Whereas Peaks is a study of field recordings’ role in this vision, and Music for Cello and Humming is one of the human voice, Shaking Studies’ focus is on the cello. Audibly framing the vibrations of the instrument on a large scale, with shaking the cello body like a pendulum. To a smaller one, with tremors of the performer’s hands and more controlled vibrato from the fingers heard in the strings. To the most finite, with wolf tones, or overtones produced when the played note aligns with the resonant frequency of the instrument - not just a cello, but specifically Hamann’s cello. And of course there are beatings arising out of sustained play; longform om, sensuous purrs, and pulsing chirpings. The meat of exploration is in the acoustic, mostly bowed, two-part “Pulse Study,” while the brief “A Reading” zeroes in on the more physical shaking and tremors and the closer “The Tender Interval” adds field recordings and electronics to demonstrate how these cello techniques might incorporate with the waves of the rest.

Taken as a whole, Hamann’s series of solos this year is extraordinarily defining. Her vision resembles Eliane Radigue’s harmony of performer, instrument, and space, yet even grander in scope (this connection makes sense when you consider that Hamann’s mentor, Charles Curtis, works closely with Radigue). The solo as a medium allows performers to elucidate themselves by ridding of variables introduced by ensemble interactivity. And field recordings are inextricably tethered to the local, the personal, and the unique. The series is perhaps the most powerful statement from a single musician this year.

Taken as individual components, Music for Cello and Humming is certainly the most complete showcase of this vision, if only by virtue of synthesizing the most things at once. Shaking Studies, along with Peaks and days collapse days collapse night, is a necessary listen in understanding and appreciating Hamann’s work this year, like a detail of a complex painting is to understand and appreciate the big picture. It is informative and expressive, but difficult to evaluate individually, especially when the grander statement of Music for Cello and Humming is already available. Still, the concept and technique here is more than most releases muster.

Shaking Studies is available digitally and on LP.