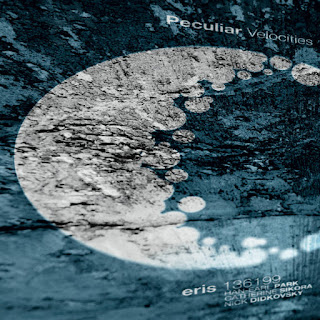 In the blurb on Bandcamp about Eris 136199: Peculiar Velocities the word ‘glitchy’ is used to describe the work of the trio of guitarists Han-earl Park and Nick Didkovsky with saxophonist Catherine Sikora. It is an apt word, as Park has an approach that is as much electronic impulses as it is human touch. Didkovsky too is a musician with a deep knowledge of computer programming but whose playing skews towards the heavier end of the music spectrum. Together the pair create an unusual foundation for Sikora's tuneful saxophone work.
The first track, ’Ballad of Tensegrity I’, is a masterful slice of trifurcated dialog. Park leans in on the lower octaves, deploying grunting tonal bursts, while Didkovsy provides atmospherics and harmonic ideas. The two act as a rhythm section for Sikora who weaves a sinuous melody throughout. The music takes turns at being haunting, gracious and grating. The next track ‘Ballad of Tensergrity II’ follows after an abrupt ending and carries on in a similar manner. By track three, ‘Peculiar Velocities I’, the guitars have adopted a slightly different aesthetic, using choppy, brittle sounds, they lay down a fractured soundscape replete with sonic barbs and suspended tones. Sikora finds her footing on this shifting ground and plays freely. As the track continues into ‘Peculliar Velocities II’ the fascinating part is realizing how connected the three actually are: this is not parallel play, rather it connects deep in the sub-systems.
’Sleeping Dragon’, the next track, takes a different tack. Here, the guitars are in agreement and they create a tensile, scratchy film that only at the half-way mark does Sikora start to skewer. Her tone cuts like an exacto-blade, a thin, purposeful slice that is almost imperceptible at first. The slice begins to open up further, as Didkovsky begins to shadow the saxophone. “D-Loop I”, which comes at the middle of the album, begins with Sikora, whose intervallic introduction is complimented with a droning guitar tone. It becomes difficult to distinguish the two at times. The track changes direction as Park (I believe) takes a lawnmower like approach and overtakes the track. Sikora fights back and the track pulls together towards a energetic peak.
There is more, but I leave this to you, hungry listeners, to discover as there is a lot to chew on in Eris 136199: Peculiar Velocities. Whether you are interested in a straight forward melodic approach, noisy electronic mists of sound, or the fantastic combination of it all, the trio delivers at just the right time.
Paul on Saturday, January 30, 2021
Share