Set of recent releases of some of the prominent musicians in the Viennese experimental electroacoustic music scene, all are often associated with the klingt.org musicians cooperative - ppooll software player-vocalist Christof Kurzmann, one of the forefathers of this scene, guitarist Burkhard Stangl, clarinetist Susanna Gartmayer and cellist Noid (aka Arnold Haberl). 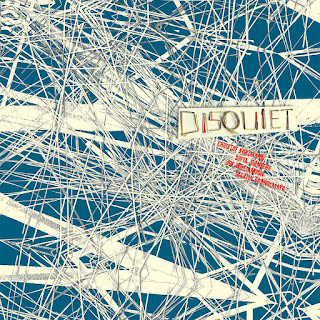 There are rare bands that succeed in materializing a sonic and poetic vision at the right time and at the right location as Disquiet does. Disquiet is a quartet formed and lead by Kurzmann for the 2018 edition of the Konfrontationen festival and featuring vocalist Sofia Jernberg (of Mats Gustafsson’s Fire! Orchestra), drummer Martin Brandlmayr (of Radian) and double bass player Joe Williamson. Disquiet, obviously, refers to the power of art to move us - emotionally and politically, but the title of the band and the album addresses the selfish and unhumanitarian policies of the reactionary leaders in Austria, Hungary and Italy towards the refugee movements to Europe. The location of the performance, in the far East of Austria and close to the Austrian-Hungarian border, and in festivals where there are no boundaries between musicians and the audience and where people from all Europe pilgrimage every year, deepens Disquiet humane vision.

Kurzmann created an unsettling and deeply emotional work that weaves a speech by Belgian Member of the European Parliament, Guy Verhofstadt, reprimanding the European Council President Donald Tusk and Austrian Chancellor Sebastian Kurz for their opportunistic “not in my backyard” policy; an inspired borrowing of ABBA’s pop hit “S.O.S.” and the obscure “Think Small” of the New Zealand rock band Tall Dwarves. These quotes and songs are delivered by Kurzmann’s fragile but touching voice, devoid of pathos, but a voice that frames brilliantly the current, selfish political climate, and later concluded with a cover of Joe McPhee’s sober “Song for Beggars” (“this song won't feed the starving, / nor will conferences of hunger / with a fortune spent on TALKING / nor will it house the homeless, / or quench the thirst of millions / who will die of lack of water, / while the vampires drink THEIR blood…”), which Kurzmann, Jernberg, and Brandlmayr already covered before (Trost Jukebox Series #2, Trost, 2014). The wordless, moaning vocals of Jernberg, the imaginative drumming of Brandlmayr, and the deep-tones of Williamson intensify the disquieting, tense but poetic atmosphere of this 47-minutes piece. Guy Peters, who wrote the liner notes, observed that this fantastic work offers a “receptive attitude” for a much-needed change. “Each worthwhile collaborative endeavor - whether it is political, musical or anything else - starts with a simple but crucial act: listening”. Disquiet may be one of the most important, impressive and rewarding listenings you may experience in 2021. 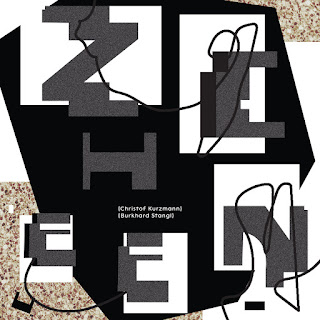 Schnee (snow in German) is the duo of Kurzmann and Stangl, a founding member of the electroacoustic supergroups Polwechsel and efzeg. Both have been working together on and off for more than twenty years now. Schnee focuses on sensory non-cerebral experience: the relationship between color, image and sound. Its music is set to imaginary, invisible films or makes music that relates to films that have not yet been shot, about resistance and liberated life. Cher (no connection to the pop icon, however the wordplay of the Cyrillic letters of the title mean snow, i.e. schnee), is the fourth album of Schnee (and the first one released on vinyl), and was recorded in Kaliningrad and Moscow’s DOM club in September 2018.  and is introduced by a quote of Swiss writer Robert Walser that captures beautifully Schnee’s poetic aesthetics: “I love plainness in color, monotony, snow is rather a monotonous tune. Why should color not give an impression of singing? White is like a murmur, a whisper, a prayer”.

The atmosphere of Cher is similar to the one of Disquiet but more intimate, introspective and clearly melancholic. Kurzmann’s highly imaginative way of reframing literary quotes, politics and pop culture within the poetic soundscapes ranges this time from a recitation of American poet Langston Hughes’ “Dreams” ( “...Life is a barren field / Frozen with snow”) on “Frozen”, an ironic cover of New Zealand’s Tall Dwarves’ “Think Small” (“... Let's all close our eyes / Let's all close our minds / Like life is nothing at all / We will think small…”) on “World”, Lou Reed’s urgent “There Is No Time” (“...This is no time for optimism / This is no time for endless thought / This is no time for my country right or wrong / Remember what that brought… “) on “Time”. The 21-minutes, last piece from the live performance in Kaliningrad includes American singer-songwriter Phil Ochs’ “No More Songs” (“...The rebels they were here they came beside the door / They told me that the moon was bleeding / Then all to my surprise / They took away my eyes / And it seems that there are no more songs…”). Beautiful and moving. 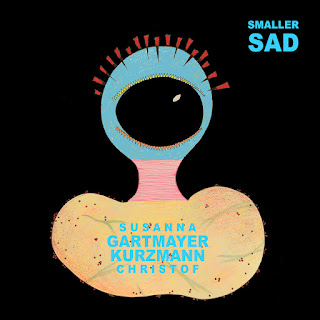 Gartmayer, who plays the bass clarinet here (and did the artwork for the covers), and Kurzman, first performed together at an open session in 2014 and continued to play together on a regular basis since 2018. Their music is mostly improvised but always focused on melodies and few songs. Smaller Sad was recorded in various locations at various times. Gartmayer explores methodically the deeper spectrum of the bass clarinet on “Smaller Forms” while Kurzmann expands these dark and resonant tones with mysterious and subtle waves of electronic sounds, in a way that feels that allow the acoustic and the electronic sounds to dance and embrace each other. “Little Rage” offers a more urgent and dense mode of interaction, where Kurzmann’s manipulation of human voices - sounding as samples of Tibetan monks - is transformed into an enigmatic choir that soars over Gartmayer’s articulation of a minimalist melody. “Dip” is a playful piece that employs the bass clarinet keys as percussive elements, resonated again and again in deeper and deeper electronic layers of Kurzmann’s ppooll-generated sounds. The last and longest “Novi Sad” develops patiently, first with quiet breaths and subtle electronic sounds, later intensifies and varies this delicate commotion with raw sounds from Kurzmann’s rubber bands act like twisted bass and exotic Far-Eastern instrument. Kurzmann sings here the poem of American poet e.e. Cummings “It is at moments after I have dreamed” (“...one pierced moment whiter than the rest...”), echoed by percussive breaths of Gartmayer.

Sadder Forms completes Smaller Sad with a new, extended piece called “Former Small” where Gartmayer and Kurzmann alternate between raw and urgent gestures and introspective and contemplative modes, almost chamber ones. The last introspective segment leads to Kirzmann’s ironic and disillusioned interpretation (with some improvements) of American songwriter Mike Posener’s club-hit, “I Took a Pill in Ibiza” (“... You don't wanna be stuck up on that stage politicizing/ Stuck up on that stage politicizing / All I know are sad songs, sad songs…”), emptying this song from its original hedonist pathos. Later, Gartmayer and Kurzmann perform again “Little Rage” and “Dip” 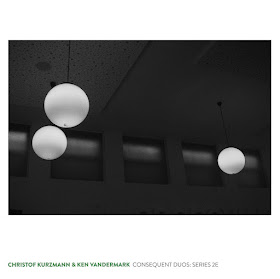 Chicagoan Ken Vandermark and Kurzmann began their collaborative work a decade ago in Kurzmann’s Infierno Musical (a tribute to Argentinian poet Alejandra Pizarnik, Mikroton, 2011), continue in Vandermark’s Made To Break quartet and more recently in Vandermark’s Entr’acte ensemble. Both recorded before as a duo Vandermark’s box-set Nine Ways To Read A Bridge (Not Two, 2014). This free-improvised recording was recorded at the Hideout club in Chicago in April 2014.


Vandermark plays here the clarinet, tenor sax, and the rarely heard, bass clarinet. Vandermark adds that he and Kurzmann did not attempt to replicate their collaborative work in other bands, though their dialog is informed by their mutual experience. In the first piece, Kurzmann sounds like orchestrating and layering Vandermark’s urgent playing on the Bb clarinet, often intensifying Vandermark’s ideas, but sometimes tries to discipline it in a completely different dynamics. Kurzmann creates a mysterious dreamscape in the second piece, while Vandermark caresses gently this quiet drone with his tenor sax. Vandermark plays the bass clarinet on the third piece and his dark and dense musings are blurred by minimalist, spacious interventions of Kurzmann. In the fourth piece, where Vandermark plays the tenor sax again, Vandermark and Kurzmann move in close courses, and sometimes Kurzmann sounds like the alien twin brother of Vandermark, interpreting his gestures in a cryptic but highly expressive language. 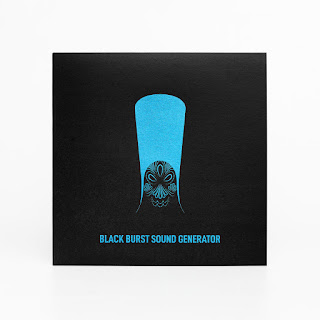 Black Burst Sound Generator (BBSG) is the duo of electronics player Brigitta Bödenauer (BB), who is also an experimental film-maker and installation artist, and contralto-clarinet player Gartmayer (SG), known from the Vegetable Orchestra and the art-rock band broken.heart.collector. Both have been working together since 2012. The name of the duo comes from analog video technology, where a “black burst” is a reference signal for synchronizing video sources: an imageless video pulse in the nanosecond range, during which the video image remains dark.
Darkness is a central element in the aesthetics of BBSG. Bödenauer and Gartmayer like to perform in dark spaces, with surreal, dark costumes that hide their faces and bodies. In these vague and dark sonic landscapes, the chilly and dry, and sometimes simply noisy polyrhythmic structures of Bödenauer’s laptop counteract the warm, harmonious, and organic outbursts of Gartmayer’s clarinet. BBSG has developed a minimalist, precise, and often ritualistic interplay but this interplay is also highly surprisingly colorful and totally unpredictable. Bödenauer and Gartmayer incorporate multi-idiomatic elements - electronica, IDM, ambient, and drone, but in every piece, BBSG succeeds to stretch their aesthetics furthermore and expand its vocabulary. The dark, woody sound of Gartmayer’s contralto-clarinet is simply addictive and corresponds remarkably with the abstract beats of Bödenauer. Bödenauer and Gartmayer offer complex forms of drama, as on “Dauerwelle” or the mysterious and cinematic “Viola”. Black Burst Sound Generator is released in a limited edition of 100 vinyl with hand-made silkscreen prints plus a download option. 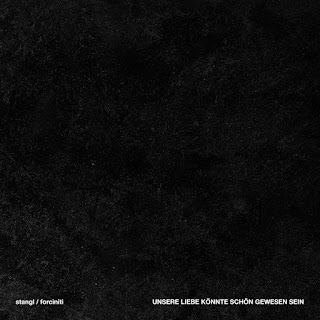 Unsere Liebe könnte schön gewesen sein (in German: Our love could have been beautiful) is a collection of three solo pieces and one duet of Stangl, on guitar and electronics, and Italian, Vienna-based electronics player Isabella Forciniti, who ”thrives to release streams of thoughts at the margins of the unknown”. This duo is inspired by the book Liquid Love: On the Frailty of Human Bonds by Polish sociologist and philosopher Zygmunt Bauman (Polity, 2000) and offers the quote: “Desire and love act at cross purposes. love is a netcast on eternity, desire is a stratagem to be spared the chores of net weaving. True to their nature, love would strive to perpetuate the desire. Desire, on the other hand, would shun love's shackles.”

The performance was recorded at Château Rouge in Vienna in May 2018. Stangl begins with the mysterious drone “02” that manipulates reeds sounds into a threatening alien texture. The following duet “il nostro amore avrebbe potuto essere bello” (in Italian: Our love could have been beautiful) is a delicate conversation between the sparse, lyrical and melodic guitar of Stangl and the delicate, crackling white noises of Forciniti. Stangl continues with another enigmatic drone, “01”, disturbed by raw, noisy overtones and feedback this time. Forciniti closes this performance with the 18-minutes of another quiet and atmospheric drone, but totally different in spirit, reaching into the margins of the unknown, far and deep space. 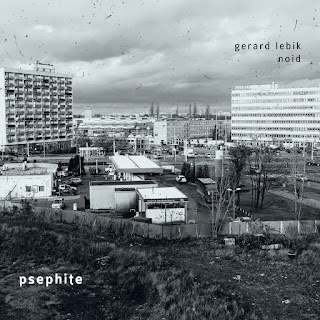 Both Lebik and Noid share a similar interest in our perception of sound waves in time and in space. The four pieces are titled after sediments. All offer minimalist and almost silent, disorienting, and fragmented interactions between the acoustic cello of Noid, sporadically played in a conventional manner and more often as a sound generator with an extended array of bowing techniques, and the unworldly and mundane electronic sounds and noises of Lebik. Psephite is an uncompromising work of abstract sound art, developed patiently with unpredictable courses, and sketching dissonant, desolate, and alienated sonic landscapes, with rare and brief glimpses of musical comfort. Enigmatic and weird but also quite expressive (in its own unsettling interpretation of the concept of expressiveness).