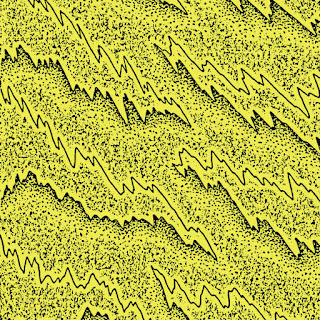 It’s been a while since I heard the music from Virginia Genta (here on amplified tenor and sopranino saxes) and David Vanzan (drums, percussion). Not because they haven’t released anything, quite the contrary I’d say, they are quite prolific. Being a fan of their output, in all its guises, I sometimes have to kill the consumer of culture inside me, slow down on buying and listen more to the good stuff.

On the other hand being a fan means that I’m aware of their musical output that breaks many genre barriers. For them , if I’m interpreting correctly their “message”, jazz is a big tree which may have strong roots, but its branches are growing in many different directions. Like the duo’s music, quite like the music of this cd, a trio with Brandon Lopez on electric bass.

I’m must be frank here and admit that I do not particularly enjoy the electric bass in any jazz based music for reasons not really interesting to mention (let’s call it my taste in music). But It is what it is seems a wholly different situation. The music on this cd, six tracks that last from three up to eight minutes, is one of those occasions when you can comment that the music takes no prisoners along its way. All tracks are powerful excursions into a blurry territory between free jazz, power rock, even metal. If you have listened to their compatriots, Zu, then you certainly get the idea. Trully it is what it is and there’s no need to put a label on it.

Due to the density and energy of the recording you might, falsely, believe that it is all about power and machismo. Well, quite the opposite. The three of them play in unison, in a totally egalitarian way. Genta’s amplified reeds make a good choice. The saxes follow and lead, focusing on speed and volume. But volume isn’t a fixation , it is a statement. Following the big tradition of reedsmen playing their hearts out, but changing it since a woman (yes!) is on the reeds, they reverse some rules of the game in what we call jazz. A game, unfortunately still, dominated by men.

I was late in my intro to mention Brandon Lopez. Not because he is not worth mentioning though. His playing, totally from the hardcore side of rock I feel, solidifies the restless playing of the other two. Partners in life as in music, they have played together so many times, that it takes a lot of willingness to integrate their bond. Lopez manages that and at the same time (and quite intentionally) the Italian duo leave enough room for the electric bass to kick ass. Another diverse release from Relative Pitch, a label that one cd after the other moves at different directions all at the same time.