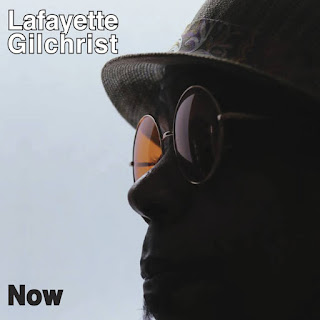 I first came across Baltimore’s Lafayette Gilchrist on the schedule of my first Vision Festival in 2006. I had actually missed his act, but, intrigued by the description, I soon picked up his live duo with Hamid Drake (the recording of the Vision performance) and his septet release Toward the Shining Path. I liked his work with Hamid Drake and found his full ensemble recordings interesting enough, but the latter had a feel that was more funky-sleek than my tastes trended. I finally caught him at a Winter Jazzfest a couple years later in a trio setting and was more impressed. However, after that, he fell off my radar. Therefore, when I came across this trio release with Herman Burney (bass) and Eric Kennedy (drums), I was intrigued. It turns out, when someone such as Gilchrist ducks out of one scene, he might just be in another, working away and refining his craft.

The first of Now’s two-discs begins with a dark bass vamp and piano lines that soon fall into Gilchrist’s punctuated funk melodies. Yes, the blues and New Orleans stride is there. So is hip-hop’s predilection for churning repetition and grandiose bridges and breakdowns. Sans saxophone, this brings to mind some of Archie Shepp’s protest music in the 1970s. Gilchrist rarely falls into the sheer force whirlwinds that characterized a lot of fire music, but he nevertheless captures much of that potential energy itching for release. The more spirited moments also call to mind the soul-jazz pioneer Bobby Timmons were he to expand beyond the 4-minute statement and have the benefit of another half-century of musical developments.

Many of the pieces on Now have an aggression and clear urgency that might point to a stormy marriage between Shepp and Timmons, combined with the wounded but righteous force of Nina Simone. Indeed, the inspiration for tracks such as Assume the Position and Bmore Careful lie in contemporary social and racial strife, including the death of fellow Baltimore-native Freddy Gray. Such inspiration might not be surprising in itself, but the way the trio integrates these pieces into an album that also includes dramatic new-school ballads such as Old Shoes Come to Life and Purple Blues, and more glistening pieces such as Can You Speak My Language, Specials Revealed, and Newly Arrived (for the latter think a bluesier Charlie Haden Quartet West minus Ernie Watts), make those statements stand out that much more.

Since I first heard his work on Toward the Shining Path, it was clear that, even when the larger ensemble just seemed too formulaic and polished for the music, Gilchrist as pianist and composer had a unique sense of melody informed by everything from blues and gospel to bop to hip hop to fin de siecle classical. On Now, Gilchrist showcases these influences even more confidently and seamlessly than before. The melodies and beats are unapologetically simple, but catchy. And, Gilchrist and co. use them as a basis from which to launch into churning, extended variations. The tracks are invariably piano-forward, as in a classic piano trio, and inevitably fall back to the funk of the rhythm section before the solos burn out or stray too far afield. Normally, I would consider the final restraint a criticism. That said, it works here. Burney and Kennedy provide a welcome grounding and, thought the pieces follow a clear compositional formula, they rarely sound formulaic.

Gilchrist, Burney, and Kennedy clearly have their own thing going here. And, I, for one, am into it.