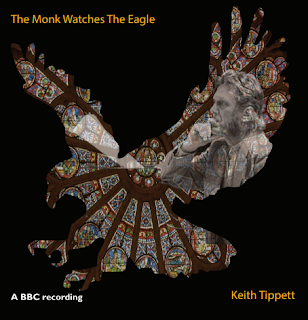 The Monk Watches the Eagle is a cantata written and conducted by Keith Tippett (with text by Julie Tippetts) in 2004 and had a single performance at a festival in Britain that year, as well as being (thank God) broadcast and recorded by the BBC. Tippett gives us the BBC Singers (as well as Julie Tippetts’s soprano) and two saxophone quartets. There are improvising soloists of both the saxophone and vocal type, as well as choral support for the soloists. It didn’t occur to me until a few listens in that the saxophones very often take on the continuo role of an organ or virginal. The blending of timbres is so well done, with such a thoughtful use of dynamics, that I caught myself thinking, “That there is some subtle organ playing.” There is, of course, no organ on this.

The Monk Watches the Eagle is one continuous 41 minute piece of music, but is divided into seven sections for the convenience of the listener. The notes say that these divisions “correspond with divisions marked in the score.” I’m not sure why that doesn’t equal, “this piece is in seven sections.” But there you go. The seven sections do correspond to what feel like story beats to me. I definitely feel a story here. An arc that moves from questioning and unease to emergence to elegy to awesome/awful ecstasy to a rest that’s as restful as any IV-I amen you ever wanted to hear (though it is not, in fact, IV-I), and that only gets us to section 4. An early reviewer referred to the piece’s “difficult contemporary idiom” and there is that Ligeti vibe at some points, but there’s also that point right at the beginning of section 2 where Julie Tippetts’s blues inflected solo evokes nothing so much as the moment when Porgy shifts out of the recitative and starts singing, “Bess, you is my woman, now.” It’s heartbreakingly good. Section 4 ends with a baritone solo from Chris Briscoe that just forces you to stop and pay attention in its quiet elegance.

A lot of relationships are happening in this piece: the two saxophone quartets play off each other, they play off the choir, each separately plays off the choir, the vocal soloists conspire with each other and saxophone soloists, etc. But the relationships and their communications merge organically into coherence. There’s also the relationship of the music to the text, which is, unfortunately, closed to us because the text is nowhere to be found (I’ve looked … if you find it somewhere, please pass it on). The reviewer in the notes calls it “rhapsodic, if rather difficult.” I can attest to the rhapsody, but not the difficulty. It’s all in English, but, except for a few sections, indecipherable by my ear. I can honestly say, I’ve never been so curious about a cantata text. When Kevin Figes plays his extraordinary, extended alto alarum in section 6, I really want to know what he’s alarmed about. Like the whole of this piece, it sounds like a jeremiad of substance.