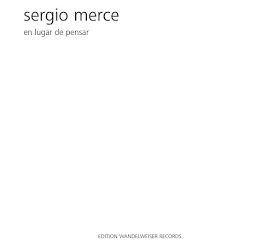 In circles, cycles, and sines, microtonal saxophonist Sergio Merce examines the intuitive unconscious in musicmaking on en lugar de pensar. The waveforms of his uniquely-valved saxophone are bolstered by the waveforms of the synthesizer, as on Merce’s Pendulum Movement from this year or Be Nothing, and an EWI (electronic wind instrument), with which he records for the first time. This is a home recording, tracked just a couple months before Pendulum Movement, but this is not an uncommon practice for Merce, whose Three DImensions of the Spirit (recorded in 2017, well before quarantine) was also recorded mostly at home. The title can be translated as “instead of thinking,” referring to the musician’s belief that revelations through musicmaking are discovered through intuition and observation rather than thinking. Perhaps the same could be said for listening because, though this could be considered a technical music, Merce makes intuitive structures for attentive listeners, filled out with satisfying textures and living rhythms.

The half-hour “forma circular” is indeed a loop. It repeats twice. Its components demarcated with silences. It begins with a swell into a sustained pitch, undulating, with overtones from which other waves emerge and that are joined by synthesizer sines and purrs. Pulses quicken and slow as they phase. The sound is similar to that of Pendulum Movement. Silence. And then an organesque melody, warm but sputtering and hissing and glitched, disintegrating into a high-volume, low-pitch rumble that sounds like something big is moving too fast for its mass. The bass feels corporeal, recalling low-end suzerains like Sunn O))) and Andy Stott. Silence. The organ and rumble repeat but with variation, ending in buzzing. Silence. A low-end groan revs up, turning like a motor. Silence. The organ and rumble repeat again, with variation, buzzing for a longer duration, so much so that pulses emerge and morph from this environment of digital distortion until transforming back to the multiphonic sax and synth pulses from the beginning. This loop repeats once more. I’m sure more observant listeners will recognize small variations between the repeated phrases.

The quarter-hour “forma continua” is indeed more structurally linear, as if one cycle of a loop was laid flat in duration and concept. Or, rather than just a circle, a circle expressed through time. This piece is a polyrhythmic orchestration of waves, arising and blending from acoustic and electric sources seamlessly. Sometimes synthesizing so fast it’s dizzying, creating a sort of wobbling tremolo. Played continuously with no obviously recurring phrases.

Beyond clever structures, Merce’s textures are sculptural and a listener could spend hours contemplating the morphing rhythms of the many harmonic pulses. en lugar de pensar is a compact but robust statement from one of the most distinctive saxophonists making music now.