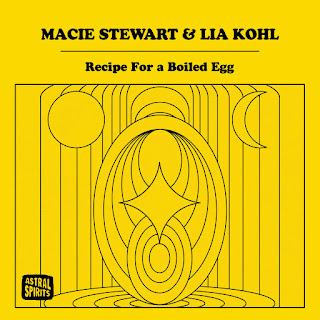 Violinist Macie Stewart and cellist Lia Kohl shred their strings and vocal cords to create a raucous harmony on Recipe For a Boiled Egg. Since last year’s Pocket Full of Bees, Stewart appeared on Tim Daisy’s Roman Poems and Rob Mazurek & Exploding Star Orchestra’s Dimensional Stardust, and both musicians contributed to James Elkington’s Ever-Roving Eye, to highlight just some of their recent activity. The duo practices an approach similar to their previous outing, but the results are no less satisfying.

The most apparent difference here is that, instead of a few extended tracks, there are eleven brief ones, with only three longer than about three minutes. Stewart & Kohl flit around techniques, volumes, tempos, and densities anyways, but the track structure cements the sense of mania induced by the musical elements which, though varied, are broadly loud, fast, and dense. So much so that the whooshes of passing vehicles and their horns in this live recording - from Comfort Station, Chicago - are drowned out until the beginnings and endings of tracks. And no wonder, because the din they can conjure from acoustic instruments is staggering. The strings sometimes sound frictional and hairy, almost as if they’re played transversely in a washboard motion. Their distressed harmonics recalling hurdy-gurdy or bagpipe on “Open Winded” and hee-hawing donkey or creaking hanging rope on “Right Before Dinner.” Stewart & Kohl incorporate plucking, bounced bows, and moments of complete tonal clarity, but the music is most exciting when they’re sawing and flaying their instruments, and they know it. But they’re not blinded by the frenzy; their playing is incredibly receptive to each other, in both mimicked timbres and techniques but also contrapuntal ones. As their strings weave a coarse textile, so do their voices, their hysteric squeals and delphic mumblings, choral hums and hymnic ooos, the guttural cry on “Screaming Tea,” the vocal resonance with strings in “Rich, Sticky, Sweet.”

Whereas some noisy and technical recordings can lean tedious, Stewart & Kohl’s sound is lively and ludic. At one moment maenadic, at another reverential, at another comic. Always texturally rich. I’m not sure that this moves their sound in new directions, but there’s so little recorded material from this duo - just an hour between two recordings - that it’s still welcome. Pocket Full of Bees was among a handful or so of 2019 recordings that I regularly revisited in 2020; I suspect I’ll have a similar relationship with Recipe For a Boiled Egg in 2021.

Recipe For a Boiled Egg is available digitally and on cassette.