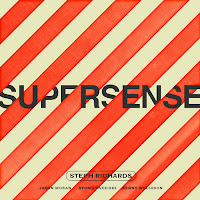 By Stef Gijssels
Canadian trumpet player and New York resident Steph Richards is truly breaking through with her own voice and ideas. Her new album "Supersense" is far removed from the music of Kanye West or David Byrne with whom she performed. She also played in the bands of Henry Threadgill, Anthony Braxton, John Zorn and Taylor Ho Bynum. Less known are her collaborations with classical ensemble as with Robert Erickson on "Camera Lucida". I recommend you listen to this piece on Youtube on which she plays with a chamber ensemble. Another recent avant-garde classical work is "Stones/Water/Time/Breath" by Dean Rosenthal. Her stylistic span is as impressive as her instrumental skills. She is also the co-producer of the Festival of New Trumpet Music (FONT), together with Dave Douglas.
She has received quite some positive reactions to her first albums. I did not care too much for her debut album "Fullmoon", on which she explores the acoustic possibilities of the trumpet which were then altered by electronic sound artist Dino J.A. Deane. I think she had too much respect for electronics, delivering in my opinion relatively cheap exercises of resonance and sound without too much musical vision.

With "Take The Neon Light", reviewed very positively by colleague Troy, she was already moving in the direction of "Supersense", with a similar line-up of trumpet, piano, bass and drums, exploring the middle ground between jazz and her personal voice, but still branching in too many directions to have a cohesive core concept.

"Supersense" is much more mature, coherent, and with a stellar band, consisting of Jason Moran on piano, Stomu Takeishi on bass, Kenny Wollesen on drums, and Andrew Munsey on drums on one track. The concept of the album is to reflect the full effect of our senses by capture the experience of a live performance. She wonders “What if I could create an experience where listeners felt even closer to the music by involving their other senses?”, taking this literally and asking "smell artist" Sean Raspet to create scents to inspire her compositions and the band's improvisation: "So with Raspet’s help, she crafted the album’s scents and compositions simultaneously, writing his concoctions into her score: As they played, the musicians would be directed to open numbered boxes containing scents that they would then respond to with improvisation".

The actual physical album comes with the scents, so you can smell the pieces and see how they relate to the music. We do not have that privilege, but that does not make the listening experience any less interesting.

Her non-rational and deliberate sensual experience also determines her music, that is organised, structured and non-linear at the same time. Themes and explicit structure seem absent, yet all compositions have their specific character and nature, and like scent, their boundaries are vague and intangible, unpredictable yet recognisable. You feel things you know from before: some bop, some funk even, some more romantic moments, but vaguely, ever so vaguely, because her bouquet of flowers send you elsewhere: into a sonic environment that is essentially different and without categorisation. You know without knowing it. It sounds somehow familiar but it's impossible to grasp. Once you think you can put your hand on it, it's gone into something new, equally hard to assess.

I have listened to it dozens of times now, and its elusive essence is still there. It's beautiful, compelling and strange. This is not the kind of music that I would automatically associate Jason Moran, Kenny Wollesen and Stomu Takeishi with, or even stronger, I thought this would be well beyond their more structured comfort zones, but apparently it's not. Their skills and understanding of where Richards wanted to go is extraordinary.

This is an awesome record. Thanks for posting the review.