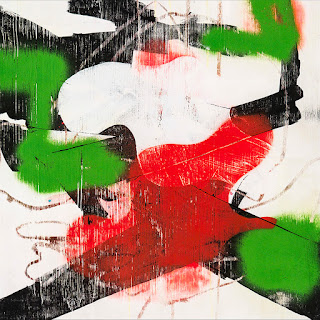 The sophomore album of the über-trio The Underflow - Swedish sax titan Mats Gusataffson and American guitarist David Grubbs and trumpeter (and visual artist who created the cover artwork) Rob Mazurek, Instant Opaque Evening, was recorded live during January 2020 shows in France, Belgium, Italy, and Poland, seven months after the recording of the self-titled debut album (Corbett vs. Dempsey/Underflow Records, 2019). The almost ninety minutes of the new, epic album testify best about the great creative power of this trio, when it explores spontaneous improvisations or when it dives into and out of Grubbs’ poetic texts.

Gustafsson, Grubbs and Mazurek need no introduction. These masters of experimental, free-improvisation collaborated briefly already in the nineties when Gustafsson and Mazurek guested in Grubbs’ Gastr del Sol albums (Upgrade & Afterlife and Camoufleur, Drag City, 1996 and 1998). Shortly thereafter Gustafsson and Grubbs recorded two albums (Apertura and Off-Road, Blue Chopsticks, 1999 and 2003). The Underflow has already established a wide sonic palette on its debut album, ranging from free jazz and abstract electronics to noise and post-rock, and suggesting rare performances by Gustafsson on flute (his first instrument), in addition to the flutephone and the baritone sax. Mazurk adds to the trumpet, wooden flute, percussion. Grubbs sings some of his songs.

Instant Opaque Evening surprises with its lyrical, contemplating tone, in relation to the debut album of The Underflow and certainly in comparison to Gustafsson’s recent projects - Fire!, The End or Anguish. Gustafsson plays the baritone sax and electronics on the opening 17-minutes title-piece with great restraint and focuses on detail, echoing the effects-laden resonant guitar of Grubbs and the floating, elegiac trumpet of Mazurek. Even in its most abstract noisy parts, this piece keeps its reserved atmosphere does not seek to reach a cathartic climax. Gustafsson’s playing on the flute on “Planks” and “Purple Laquer Portal” is even more revelatory, introducing gentle, kind of chamber folk veins into these soundscapes, and taking the seminal influence of Don Cherry but drowning it on the latter piece in a stormy sea of electronics..

Mazurek’s wordless voice reverberates beautifully in Gustafsson’s flute playing on the sparse and intimate “A Thin Eternity”. The following “Not at My Funeral” relies on extended breathing techniques of Gustafsson, Mazurek’s natural gift to articulate instant melodies and Grubbs’ subtle, guitar lines, and deepens the restrained, dark and mysterious tone of the album so far. Mazurek’s effects-laden trumpet, and later his wooden flute, set the unsettling tone of “Sound of a Wet Leather Ball”, disturbed later on by raw noises. The 14-minutes “Self-Portrait as Interference Pattern” is the only piece where The Underflow goes into extreme, sonic terrains, with apocalyptic, raw and noisy layers of electronics that even the brief trumpet cries of Mazurek can not pierce, but eventually, even this piece settles on a lyrical, fragile mode.

Grubbs sings three songs. The previously recorded “An Optimist Declines” and “Gethsemani Night” (from An Optimist Notes The Dark, Drag City, 2008) and the moving, last piece on this album, “Cooler Side of the Pillow”. He recites-sings the poetic lyrics with a voice that is openly vulnerable, accompanied by his distorted guitar sounds, Gustafsson’s sax wails and Mazurek’s atmospheric trumpet, all serve brilliantly the suggestive, dramatic lyrics.

A beautiful gem. Each listening reveals more and more nuances of the unique free space that The Undeflow explored on stage.