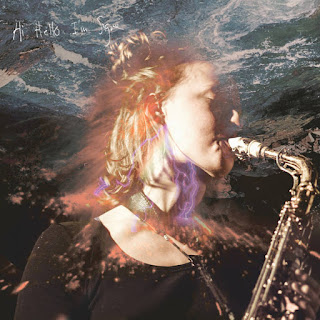 About a year and a half ago, the Free Jazz Blog crowned Danish, Oslo-based alto sax player Signe K. Emmeluth as The New Danish Thing. Since then, Emmeluth, leader of the free-jazz quartet Emmeluth's Amoeba, co-leader of the sound-oriented OWL duo with guitarist Karl Bjorå and the newest addition to Paal Nilssen-Love’s Large Unit, received in this year’s edition of the Norwegian Molde Jazz Festival the SpareBank1 SMN JazZtipendiat, the largest awarded to Norwegian improvising artists, to develop her project “Physicality in / emotion”.

Hi Hello I’m Signe, Emmeluth’s debut solo album and the first one to be released by a non-Nordic label and should introduce this creative phenomenon to new audiences, after making a strong impression on the European free music scene. This album is Emmeluth’s contribution to Ingebrigt Håker Flaten’s online edition (due to the coronavirus restrictions) of the Sonic Transmissions Festival, recorded at Oslo’s at Kafé Hærverk in August 2020. The album was mixed and mastered by drummer-guitarist Weasel Walter and the cover artwork was created by Norwegian tuba player Heiða Karine Jóhannesdóttir.

Emmeluth has been working on her solo performances in recent years (see the video below). She says that playing solo is a “laboratory and a playground where impulses, curiosity and spontaneity are the cornerstones”. Obviously, such kind of solo efforts offers many insights into the alto sax sonic possibilities beyond common genre conventions, and an opportunity to explore its timbral range, as well as Emmeluth’s own physicality in relation to her instrument and the shape of the music. Furthermore, Emmeluth seeks to challenge the listener’s perception of what sensual music is and can be.

Judging by the 35-minutes of “Action Painting en Vogue”, Emmeluth does so beautifully. She structures the piece cleverly, beginning and ending it with quiet, restrained breaths. Patiently, her clear, captivating voice and her open but strong-minded approach become apparent, as she produces suggestive phrases that ricochet upwards towards the top register of the alto sax. Later on, she builds the emotional drama while alternating between, contemplative and light, almost transparent but sometimes also noisy and dissonant phrases, and powerful, fire-spitting attacks. And she does so with a mature voice, a great sense of control and detail and compelling elegance.