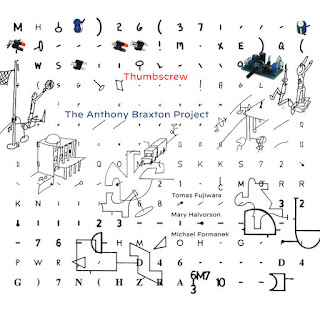 For as long as Anthony Braxton has been a vital force in this type of music, as well as being compositionally prolific, there aren't many recordings of other people doing his music. In 1994 a San Francisco group aligned across country with a Boston bunch to produce Jump or Die: Splatter Trio & Debris Play Anthony Braxton, a delightful disc on Music & Arts. Two of the participants, Gino Robair and Randy McKean, had studied or recorded with Anthony who was supportive of the project and provided scores. Fast forward to 2010 when John Zorn recruited Marilyn Crispell, Mark Dresser and Gerry Hemingway, members of the legendary mid 80s through mid 90s quartet, at Braxton’s 65th birthday concert, and hustled them to a studio to record Crispell-Dresser-Hemingway Play Braxton on Tzadik as reviewed here. Guitarist Noël Akchoté undertook the massive Complete Recordings (Plays Anthony Braxton) on his Bandcamp site. and, for individual pieces being recorded, the ROVA Saxophone Quartet included “Comp. 37” on their 1987 Beat Kennel on Black Saint, the Vandermark 5 played “69L" on 2001’s Free Jazz Classics Vols. 1 & 2 on Atavistic and “69-0” was on Angelika Niescier, Thomas Morgan and Tyshawn Sorey’s 2011 Enja recording Quite Simply.

For Braxton's 75th birthday, Thumbscrew was invited to the Tri-Centric Foundation’s Braxton archives over an afternoon to explore compositions, primarily early rarely played pieces, that would fit a guitar/bass/drums or newly added vibes (Tomas Fujiwara was late getting to the composition selection meeting and some had already been selected with three melody lines) lineup. All three members have played with Anthony previously, ranging from Mary Halvorson’s appearance on recordings spanning ten years to Fujiwara being on three recordings to Michael Formanek being second bassist on a Knitting Factory multimedia production. So all were familiar with Braxtonian notations and made insightful decisions on how each piece could adapt to the Thumbscrew imprimatur. Carl Testa, director of publishing for Tri-Centric, assisted the trio and further pointed out that Braxton gives interpreters free rein regarding tempos and dynamic ranges, and that instrumental parts are changeable. From there it was off to a four week Pittsburgh residency to arrange these as well as developing other compositions for further projects.

Although the focus was to be on lesser known works, the opening “Composition No. 52” first appeared on a 1982 Antilles Braxton release with Anthony Davis, Mark Helias and Ed Blackwell entitled Six Compositions: Quartet and on subsequent live recordings by the Crispell/Dresser/Hemingway quartet; so some listeners might be familiar with this. If so they'll find a more relaxed and swinging tempo here, with Halvorson playing more fluid lead lines than early Braxton’s alto supersaturated note explosions which, admittedly, for me was part of the charm. Also they use ritards on alternating measures in the B section. Two versions of “Composition No. 157” appeared on Duets, Hamburg 1991 on Music & Arts with bassist Peter N. Wilson, much of which is a repeated 8 note pattern on sopranino over which the bassist improvises before some structured interplay briefly interrupts the pattern over a seven to nine minute duration. Thumbscrew’s shorter version loosely hints at the eight note pattern while interjecting their own disjointed counterpoint in a refreshingly brief exploration with Fujiwara’s drumming being particularly energized by the basketball graphic title.

The Thumbscrew adaptation process is well illustrated on the final piece, “Composition No. 79”, originally scored for a piano, bass clarinet and trombone as a tribute to the Southwest territory bands of the 30s, specifically Count Basie in Kansas City. Formanek takes the piano’s walking bass line as a foundation, over which Halvorson's badass dissonant chords suggest taking it even further southwest to Bob Wills electric Texas Swing bands. Then Tomas enters the mix on vibes and plays unison lines with Mary while the bass maintains the rhythm. It's a joyful song throughout all subsequent twists and turns, including Fujiwara switching to drums and back, surely capturing the composer’s intentions. A more open ended composition such as “Composition No. 14” is based on a graphic score of geometric shapes from which each member has a solo performance whereby their interpretation is documented in three very different first takes. Slightly more structured was “Composition No. 35” which was made up of cardboard pieces with notes on them along with composition notes specifying an order without identifying which piece was which. The group spent a lot of time deciphering that and the end result sounds much more coherent than it would have in the custody of less accomplished musicians.

This album grew on me through successive listens. It's impossible for any listener of Braxton to approach something of this nature without preconceived expectations; in my case the early Aristas through Crispell/Dresser/Hemingway, particularly featuring Braxton's saxophone. So my initial reaction was it sounded bloodlessly analytic. But through subsequent listens it became more interesting as repetition revealed just how well the trio intricately adapted the compositions to their format while still maintaining a Braxtonian identity. It's too bad that public health concerns haven't allowed touring in support of this release because performing songs repetitively during a tight timeframe creates opportunities for further development. Lacking that for now, I'm sure the composer is pleased with these interpretations.