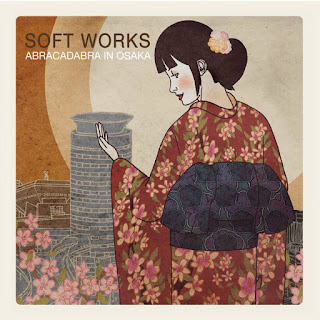 I tumbled into the rabbit hole of Soft Machine with a download of Third. From here it took me a bit of time to understand how it all came together - from the group's late Sixties psychedelic days to the jazz-rock of the early of the early Seventies, then to the numerous mutant offshoots that began already in the late Seventies: Soft Head and Soft Heap, and later with Soft Mountain, Soft Bounds, Soft Works, Soft Machine Legacy, and finally Soft Machine.

I’ve enjoyed many, if not all, of the incarnations of the ‘Soft-' groups that Hugh Hopper and Elton Dean spearheaded, except one: Soft Works. Even though the 2003 release Abracadabra was the great reunion of Hopper and Dean with long-time Soft Machine drummer John Marshall and guitar legend Allan Holdsworth, from such a line-up, I had expected just a bit more of a ‘kick' from the album. So, my hope was that Abracadbra in Osaka, a double album documenting a concert by the group back in the early aughts, would fill in the pieces that I felt the studio album missed. I am happy to report it does. Elton Dean's unique saxello seems just a little more sour, in a painfully good way; Hopper and Marshall’s playing is just a bit edgier to my ears; and Holdsworth, especially, kicks it up a notch or two.

The opening track on both the studio album and the live recording, 'Seven Formerly', starts slowly and builds to low-boiling point in both cases, but the studio recording version is softened a bit to much by synth and lacks that extra crunch that the live version brings. The Hopper penned track ‘First Train' similarly fares just a little better on the live recording, and Holdsworth's solo around the four-and-a-half minute mark reaches a climatic intensity. Soft Machine staple 'Kings & Queens' gets an airing on the live album too, which provides Dean essentially with a showcase to play an extended, relaxed solo over a suspenseful, familiar background.

A real plus from this new release, for me, is that I've come to appreciate the studio album better as well. The subtleties come into better contrast and the parts where the fusion becomes a bit too fusiony are easier to let pass by. Overall, a nice addition to the reincarnated Soft Machine’s discography. Also, be sure to check out the latest version of Soft Machine with Live at the Baked Potato, a nice document of an ever adapting band.