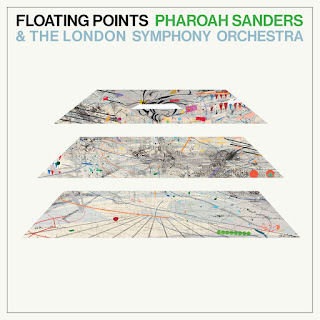 After one minute and 23 seconds, it’s there for the first time. That squeezed, yearning, inimitable tone. No one can elicit such a sound from a saxophone but Pharoah Sanders, the grand old man of free jazz. And - to be honest - one would not necessarily have suspected of the 80-year old legend that he would soar to such musical heights once again. The main reason for this career highlight is the British electronic musician Sam Shepherd, who goes under the moniker Floating Points. For Promises he recruited not only Sanders but also the London Symphony Orchestra, which underpins his 47-minute composition, divided into nine “Movements“, with bright woodwind and string patches (to me the movements are more like meditations).

What we first hear is a short chord of seven notes that will accompany us throughout the piece, as if angel harps and wind chimes were at work. However, it’s actually a harpsichord, which grumbles very prominently, joined by a piano lid that rumbles open and closed, scraping like a percussion instrument. In between, Shepherd keeps packing cautious little loops, chirps and sphere music speckles that sound as if they were created by analog synthesizers, giving the floating Promises' corpus a fragile, gently swaying framework held together by the aforementioned chord.

“Movement 3“ and “Movement 4“ are undoubtedly the center of the composition. In the first one the orchestra appears, at first almost delicate and restrained, but then firm and shrill. Sanders counters in “Movement 4“ with his warm but powerful tone, and here he is indeed reminiscent of his great albums from the 1960s and - of course - John Coltrane. The atmosphere created is so deeply human that it almost makes you cry.

On the one hand, the attitude of Promises is a highly emotional one, slowly and meditatively unfolding like a spiritual jazz album reaching for transcendence, but translated into the present with modern production tools. On the other hand, it’s great drama - reminiscent of Henryk Mikołaj Górecki’s Symphony Nr. 3, especially in “Movement 6“, when Sanders drops out and the orchestra completely takes over. If there was a remake of Douglas Sirk’s All That Heaven Allows this could be the soundtrack. In contrast to these very obvious elements, though, there’s the way the album deals with silence. Sometimes the pieces are so quiet you might check your volume setting to see if it’s still on, for example at the very ends of “Movement 8“ and “9“.

Shepherd recorded the album over a five-year period, it seems to have matured like an excellent wine. Therefore, the music wants to be heard as a whole (there are no breaks between the single tracks), a good stereo system is helpful and you shouldn’t listen to it on the side. On the contrary, you should surrender completely to the music. Let yourself be carried away by the emotions presented. Enjoy every single tone of Sanders tenor, they are like drops of liquid gold. It’s nice to hear his voice so beautifully once again.

Promises is available on vinyl and as a CD.

Catch a glimpse of the album here: