The Turntablism Schools of Joke Lanz and Ignaz Schick 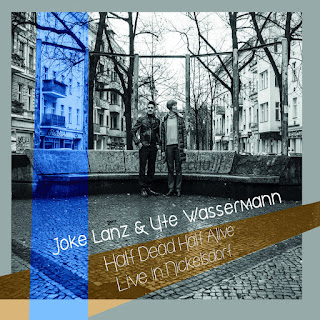 Lanz is not only a master turntablist bat also a modern-day,punk-dada prophet, noise musician and sound artist, known as the leader of the art-rock group Sudden Infant. He has worked before with Vocal artists like Shelley Hirsch and Audrey Chen. Ute Wassermann is a German, fellow-Berliner extraordinary vocal artist and sound artist who has developed highly personal vocal techniques. She extends the many sounds of the human voice and body with bird whistles (her website is: birdtalking.de), resonating objects, prepared loudspeakers and different microphones. The duo has been playing together since 2016 and their debut album was recorded live in the 2019 edition of the Austrian free-improv Nickelsdorf festival.

Lanz and Wassermann are imaginative sound sculptors and on Half Dead Half Alive they offer a wild ride, often a manic and totally eccentric one, but a highly communicative and engaging one. The hyperactive, puzzling vocal gestures, free of any linguistic usage, and the fragmented, cartoonish sounds shift and reshape instantly, faster than the speed of sound itself, never attach themselves to any pattern, narrative or deep emotions for more than brief milliseconds. The unpredictable Lanz and Wassermann keep courting each other while busy deconstructing and twisting each other's ideas in their very own subversive dance, as both are equipped with generous doses of irony and humor. Their sonic references encompass everything from exquisite operatic singing to refined Japanese royal court music.

The listening experience may leave you shocked but guarantees tons of fun. If you can imagine rare, colorful birds, with a flair for dadaist mischief, dance along anarchistic techno grooves that threaten to melt your brain, you may get closer to what happened in this outstanding performance. 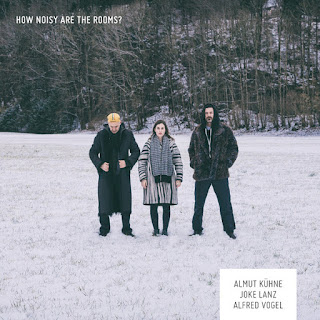 How Noisy are the Rooms? takes the provocative, hyper-fast anarchy of Half Dead Half Live and adds a strong rhythmic drive to the volatile recipe. Lanz meets here the Berlin-based vocal artist Almut Kühne, known for her collaborations with German reeds player Gebhard Ullmann and pianist Achim Kaufmann, and Austrian drummer Alfred Vogel, known for his collaborations with reeds titan Mats Gustafsson, his own trios Edi Nulz and Hang ‘Em High and his Bezau Beatz festival. Vogel initiated this project, recorded the debut album of this new trio just before the Covid-19 pandemic lockdown, and released it on his own label.

Kühne, Lanz and Vogel, unlike Lanz and Wassermann, do seek to suggest sketchy, labyrinthine songs out of their concentrated energy and constant collisions of manic vocal gestures, alien, futurist sounds, and powerful, often ritualist groove. This trio also opts for a wild ride, still a restless and merciless one, but one that tosses the listener mind back and forth, always at all points at the same time, as if the listener - voluntarily, or by sheer innocence - is a pinball machine game. Naturally, there are subversive and quite hilarious games that flirt with and twist anything from noise, through trip-hop and hip-hop and free jazz. Kühne explores touching emotional layers in “Love Song”, but Lanz and Vogel do their best to squeeze out all traces of sentimentality from it. On “Amma Chenne Cha” the trio united for a clever wordless parody of macho-packed hip-hop. “Detox Zombie Porridge” drowns and resurfaces again and again from a noisy, manic swamp. “Heart Attack” resurrects the pixies from Daevid Allen’s Gong for a romantic but epileptic dance. The last-title piece sums the wonderful and addictive chaos of this anarchist trio. 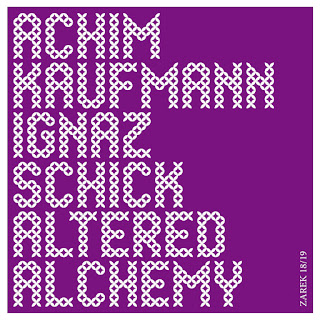 Keith Prosk recently reviewed Schick's ILOG2 duo with Olie Steidle, the drummer known from the free jazz bands Klima Kalima, Der Rote Bereich and Oli Steidle & the Killing Popes, which follows in the  spirit of Lanz's albums reviewed above. Altered Alchemy, however, is a completely different project. Fellow Berliners, prolific pianist Achim Kaufmann and Schick performed together for the first time in 2015 when they toured Finland as part of the pan-European sextet Sestetto Internazionale. In their duo, Schick opts for a more experimental but refined and subtle sonic territory, compared to the restless cut-ups of Lanz, still, his interplay with Kaufmann is still intimate despite the abstract tones. Kaufmann enriches the sonic universe of Schick with his multi-layered sounds and advanced harmonic concepts. Altered Alchemy was recorded in February 2016 over the course of two afternoons, but Kaufmann and Schick continued to perform in 2020, right before the second Covid19 pandemic lockdown in late October.

The double album Altered Alchemy is Kaufmann and Schick’s very first-ever session before they even started performing live concerts. The sequence of the pieces was not altered, and only a few sections were shortened. You can sense how this collaborative process develops, from the traditional piano playing and unconventional piano preparations, with some pedal-echo effects of Kaufmann, contrasted instantly by Schicks’s noisy loops, alien sounds and heavily-processed and mostly unrecognizable quotes produced by the turntables, sampler and live electronics. Kaufmann and Schick are busy investigating distinct and inventive ways of matching acoustic and electronic sound, in a compelling, mysterious mutual play. Later on, as all sounds are morphed, shaped and manipulated it becomes difficult to tell who is doing what. The eight extended, spontaneously-improvised “Alteration” soundscapes sound as adopting a John Cage-ian ethos (“everything we do is music”), referencing the methodical search for new sonic options by the European school of sound-oriented free improvisation and the compositional strategies of Musique Concrète.

Kaufmann and Schick succeed to create a highly expressive, nuanced and surprisingly intimate sound universe of their own, even in its most tense and abstract moments. Their organized chaos of colliding sounds has its own cryptic logic, a very suggestive vocabulary and syntax and an inquisitive and twisted mode of playfulness.