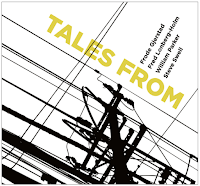 Prior to the pandemic disruptions, veteran Norwegian reedist Frode Gjerstad often seemed like the ultimate road warrior with his indefatigable international touring schedule.  Last year’s touring problems were partly offset by a massive Bandcamp digital data dump of recordings under his control, previously released or otherwise, as documented here.  In addition to that treasure trove he still had unreleased material from 2019 including this September date assembled in New York.  This group, by my research the first recording of it, came about by accident.  Frode traveled to play two gigs with Lonberg-Holm in upstate New York along with two in NYC with Fred and Matt Shipp.  A subsequent recording session was scheduled by Gjerstad with Swell and Parker.  Shipp had a scheduling conflict and the resolution for one of the concerts was for this quartet to perform along with this recording session.

Given the unplanned way this session arose, the familiarity of the players with each  other along with their ability to listen and react to each other assured a certain level of satisfying interplay.  With Parker bringing a tuba, cornet and flutes along with his bass and Lonberg-Holm’s electronics, additional tonal colors shook things up nicely.

Although it goes without saying that the pleasures of these types of improvised recordings make themselves known through repeated listenings, some require more than others.  These performances unfurl themselves at their own pace, with Swell and Lonberg-Holm paired up in one channel against Parker and Gjerstad.  What becomes evident is how well the participants use space fluidly.  Frode has a hard to categorize style which is often better for the uninitiated to experience in concert than through recordings.  He's very adept at filling available space with just the right sound, whether augmenting Parker’s blues based strumming or Lonberg-Holm’s bowing with a full bodied clarinet or joining a cacophony with his alto lines to lend direction.  Parker plays a lot of cornet and flutes here, so much so that when he picks up the bass or tuba it provides a welcome underpinning that the others had been providing by other means although William and Swell’s brass interactions often provide a solid foundation.  Lonberg-Holm’s cello likewise often provides the rock upon which these performances are built.  Swell’s trombone is the singular instrumental constant throughout it all, whether blaring rhythmic support for the others or soloing over Lonberg-Holm with the abandon that a seasoned improvisor can draw upon effortlessly.

Although all of these players have been well documented, I think they caught lightning in a bottle at this previously unplanned session.  The liners mention that two days later Frode on clarinet, Steve and William on tuba played an impromptu afternoon concert in a park on the Lower East Side in which they sounded like a band from the 20s.  I really wish that had been captured.  But lacking that we have this thoroughly satisfying recording.