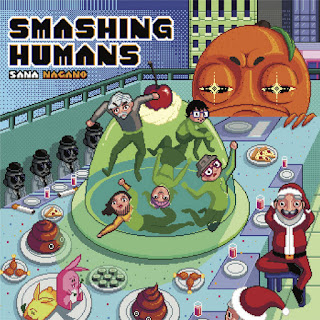 By Paul Acquaro
New York based violinist Sana Nagano's Smashing Humans begins with a no-nonsense musical statement. 'Strings and Figures' starts off with a few strokes of Nagano's bow across the strings and then is joined by a lurching bass figure and straight ahead drum figure - but placed slightly akimbo against the bass' downbeat - and then a sand papery blast from the guitar. What we are about to hear from this self described "noise-jazz violinist" is fierce and fiery, sure, it scorches, but it is also exudes an welcoming warmth.

This sentiment is also carried by the album's cover image - a pixely image that seems to work the double entendre in the title. Just what is that ornery orange about to do? Smash the people in the Jello mold into little tasty pulpy bits? Or is that just a bunch of “smashing” good humans? Hardly matters, it is good fun added on top of the buzzing music.

To make the music, Nagano has rounded up a serious bunch. Joining the violinist is Peter Apfelbaum on tenor saxophone, Keisuke Matsuno on electric guitar, Ken Filiano contributing acoustic bass and Joe Hertenstein on drums. Long time readers of the blog and followers of the New York downtown music scene will know many of these players, but a newer name (at least to me) is Matsuno, whose intense approach and distorted tone adds texture, melody, and energy to mix. 'Loud Dinner Wanted' is a great example, his roll is both as agitator and a colorist, and his extended presence in tune adds quite a bit of thrust.
At the same time, the smaller interlocking pieces help make the music ever engaging. The noisiness is important, but the intricate figures, like the violin/guitar moments in the beginning of the same track, makes the louder moments even better. During ‘Humans in Grey’ is another good example, in how the introductory phrase, a sinuous legato line from Nagano, wraps itself around defiant hits and forceful phrases. You can almost see where the tongue and groove joints are, but the music becomes so infectious, and seemingly complex, you can get lost in it. Then, half-way through the 10 minute track, the grooves give way … for a little while. Similar exploratory playing festoons 'Heavenly Evil Devil,' where is makes up the bulk of the tune.

Smashing Humans is an excellent debut album from the Nagano on the Brooklyn based 577 Records. Last year, the label released the debut from another group that Nagano is a part of "Asroturf Noise" - an avant bluegrass trio. Check 'em both out!
Paul on Sunday, March 21, 2021
Share