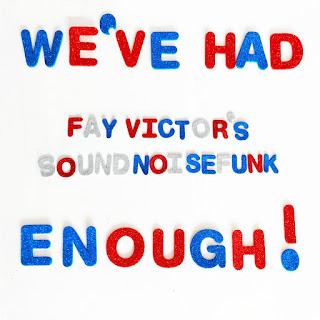 The second instalment of Fay Victor’s SoundNoiseFunk We’ve had enough! is exactly that. It is Fay Victor with her artistic vocal capacity in the center of… yes, sound and noise and all that on a rather funky base.

I recommended the second song of the album “What’s gone wrong?” to a friend who is not into Free Jazz or improvised music or anything like it because I think this is a beautiful song and maybe a good way into free music with vocals. But let’s start at the beginning.

Over the last couple of years, I started to appreciate Free Jazz (I use this term here in lack of a better one in reference to the music probably interesting to the readers – and writers – of this blog) with vocals. This is a still rather new development, which started with the voices of Mariam Wallentin, Amirtha Kidambi and Sofia Jernberg, for example in the context of Fire! Orchestra and The End and so on. There are a lot more to name, Moor Mother in particular. (I know it is difficult to just name these four but for my way into vocal music they were very formative.)

And Fay Victor was another important voice on that way. Especially with her first album with the SoundNoiseFunk, Wet Robots.

(I have to admit I didn’t have the time yet to dig into all the music she did and does as well.)

So here we are with the second album of Fay Victor’s SoundNoiseFunk.

It starts with “Ritual”. Already with this first track, it is all about her voice. Singing and dancing over some spare saxophone and percussion sounds. Though the title is ritual I have the strong association with a lament. Maybe because it is the most non-funk(y) piece on the album. A quiet but intense start with the album.

Then comes the track I recommended to my (slightly irritated, hopefully positively irritated) friend. The lyrics state the question of the title: What’s gone wrong with the world? The song develops on the basis of a simple guitar line a strong maelstrom sucking you in. In the sound, in the noise and funk and into the question stated in the lyrics.

With or without recognizable lyrics, the whole album states a great concern with the state of the (political) world we live in. It is a great lament in free form. So the focus might be the Sound this time in the SoundNoiseFunk.

The third track “I.M. Peach” (nice pun) starts with again some spare sounds (guitar, saxophone and some drum sounds) and in the center the impressive voicing of Fay Victor. Here the voice is another instrument used in an impressive manner. No lyrics needed to feel the pain, the pressure, the urge in the music. A music that leans on this track a lot more towards sound than funk or noise.

“Wereld Worn” starts with a flute line and builds again a moaning vibe. Fay Victor works with a few lines of lyrics, criticizing our handling of the climate and environment crisis.

“Momentary Mandatory Joy” is a rather short piece of vocal art accompanied by a rather prominent (compared to the other tracks) drum set. And though I already said that the album has a mournful vibe, it is on the other hand a great joy to hear her executing her vocal skills.

“Let the breeze in” changes the vibe. Here we have the full impact of sound and noise and funk. After all the moaning it feels like a cry to get up. To get into motion. At least that is what the music does.

I might read too much into the titles of the tracks (but that doesn’t matter, I hope). However: the next track “Te ara whakamua (The Way Forward)” seems to me a bit more light-hearted without losing any bit of intensity. Which leads to the last piece: “Fatal catalyst”. This continues the way of the more joyful expression.

It is common to quote the liner-notes upfront. Mostly to critic them. But here I want to end with a few words from them because they fit perfectly:

Buy the album via bandcamp (six out of the eight songs are there to listen to for free).