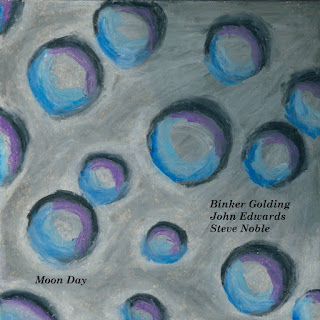 Binker Golding is releasing Moon Day on Byrd Out records, in a trio with John Edwards on double bass and Steve Noble on drums. Just 300 will be pressed in the first run with more to follow and on digital platforms.

'For S.K'( Stage H Edit) opens the album, and this is a free-flowing rolling number with the sax sounding like it is travelling its own road, the drums and double bass providing percussive lines which follow the sax's melodic phrases with countered, off-set rhythms, the bass at one point repeating and then rising glissando from the depths of its body like a Kraken awakening. At times the deep notes of the drums meld with the bass to create almost chordal lines. A beautiful and freely played opener.

'For S.K' is ethereal and packed with rhythmic diversions as the sax flits through keys with reedy efficiency whilst the double bass creates resonant, steady support. There are several sections where the bass settles around repeated lines with sax and drums answering with changing rhythmic diversions, creating an exquisite sense of orbiting around the steadiness which the bass provides. This is a track of many parts, and each musician leads then follows as they listen intently to what is going on around them. There is a quieter, atmospheric section followed by a loud, busy, bustling period before the bass rises, deep and sighing. A single strung note creating the backdrop on which drums and sax build. The quiet returns before being pounded out of existence as the sax get busy, followed by the bass and drums until the sax sings out loud, bass and drums follow, the drums almost swinging, and the finishing phrases are developed—over twenty minutes of joy.

'Lunar Wind' sets off at a pace with sax running amok along the keys, the bass joining first with single notes and then with increasing complexity. The trickering of the drums is impressive as they wicker away behind the sax and bass, now in higher mode before dipping down again. The sax gives hearty, reedy notice, accompanied by sliding, squeaky bass and gentle percussion before the bass dips down to deeper levels and the sax flows freely around the keys. The bass and drums then rise and swell around a held sax note, and the bass is left temporarily alone, with drums joining and sax, now more melodic, providing a simpler lead.

'One Giant Step, Part iii (Laika's Short Orbit edit)' begins with bass and drums each on their own pathways, which diverge and join, weaving in and around each other, before the sax enters high and loud with yet another rhythmic pattern. The track then develops as the instruments reflect and flow around each other's changes, and it works well. The sax lines are almost short, curt inserts into the background solidity created by bass and drums, only in the final third does it take on more of a lead, which is the best part where each instrument supports the others.

'One Giant Step Parts i-iv is 23 minutes of interesting, free form music with the sax creating bluesy, soulful melodic lines - improvising around the chosen keys for the first part, bass joining in with gentle, deep, rich belly notes, percussion entering subtly and then emerging with its own interpretation of the atmosphere. What follows is twenty minutes of sublime interaction, the atmosphere created mostly by the double bass, which seems to be in a world of its own with the sax and drums working around it. There is a lovely section where the sax is up high, percussion adding shakers and gentle percussive noise before the bass adds the textures and depths before a wonderful conversation episode happens between the three musicians, culminating in a bluesy, temporal floating coalescence. Beautiful

'Reflection' finishes the album, and this is another example of 3 musicians at the top of their game, intently listening, interacting and reflecting each other. The sax, at times, runs wild, with the others following in close musical pursuit. At other times, the bass and percussion lead the way with sax, setting the tempo and rhythm changes.

This is a great release, sublime, soulful, bluesy and free. Each musician is superb, and the understanding and interaction between them is something to behold. A release worthy of success and a release that is both free and yet contains enough melodic music to engage listeners.