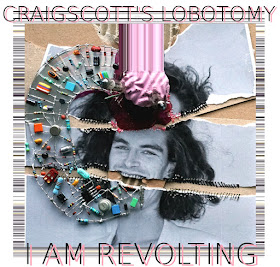 Inspired by dissatisfaction with improvised music's transience, Craig Scott has released his second album, Craig Scott's Lobotomy, 'I Am Revolting', a combination of electronica and improvised jazz music. Abetted by a host of like-minded individuals, including Joost Hendrickx on drums, Sam Bell on Batta drums and congas, Michael Bardon on double bass and cello, Johnny Richards on piano, Oliver Dover on clarinets and saxophones, Matthew tiffany on violin, Lawrence Marshall on trombone/Suzaphone and one-man band, John Scully on trumpet, Matthew Cliffe on flute and Craig Scott himself on guitar and drums. Scott also composed the music.

It is an extraordinary recording, bringing together strong improvisational elements with live recordings of acoustic instruments and field recordings which are assembled and disassembled to create music which Scott describes as a 'genre-defying allegory of our navigation of the digital age - as the lines between ourselves and digital anima become blurred, we are overwhelmed with the exponential growth of information and consensus reality crumbles...'

The album took five years to pull together and has been meticulously arranged, disarranged and put back together using Scott's own recording equipment. It is available in the form of a pink concrete brain, which houses a USB stick, a limited vinyl run of numbered, lathe cut vinyls, and digital platforms. There are five tracks on the album. The first ' 'I am revolting' is created by percussive sounds over piano, which repeats the motif repeatedly - the sounds at the beginning sounding uncannily as if they originated in a kitchen. As the track progresses, although it repeats, the theme is extended, shortened, and in one place, an almost orchestral interlude breaks complete silence. A series of silences and explosive injections of noise create a disconcertingly engaging succession of sounds, which disorientate and shatter the senses. Ending eerily with birdsong and strange electronic sounds, and what sounds like a chronograph, it is a strange track indeed but also one which attracts you back for several listens.

'Surfing or Drowning' emerges seamlessly from the first track's ending and is worked around a 7 note motif that is strangely ear-wormish but also irksome - intended possibly. The sense of a laboratory where sound and essences of emotion are put together, taken apart and then reworked to create some kind of amorphous universe, the secrets of which are only known to a few, is uncanny. The sheer differences of noise are incredible. The chaotic ending is tempered by playful piano, which teases the heck out of a few notes.

'Innuendo and Out The Other' sounds like a standard that has been surgically dissected, the parts re-arranged in random order and re-assembled into a stumbling, careening animal which drips little motifs and phrases as it ambles along. Strange, crude sounding yet also striking. The uneven tempos and time changes work wonders for the temperament. The end portion is manic, energy-filled, and again, the sense of being in a music laboratory is strong.

'Everyone is Revolting' is noisy, very noisy, yet the noises are interrupted by profound silences. The explosive anarchy of the instruments is overtaken by a sense of disharmony and the sounds being separated, yet conjoined by some cunning alchemist. Amongst the sounds, you can decipher a violin and clarinet in tuneful mood, some sweet birdsong and a regular heartbeat, whilst all around is chaos.

'Sounds Like You Had Fun Making It' is the strangest shot in the arm. Beginning with percussive sounds, which develop into a rhythmic, marching, brassy opening section, a big band parade and then applause before it speeds up and turns into something of a disassembled hotch-potch which is at once difficult listening and at the same time quite mesmeric. No criterion can be attached or explanation given for what Scott has done to the sounds here. And why would you need to attach a genre to this?

The album is short but this music has a huge presence. Not for the purist, that is for sure, but for the improvisers who enjoy hearing sounds reworked into something extraordinary, this is one to hear. The human elements of fun, experimentation and a good dose of traditional jazz values are all here within a wrapping of sheer indulgence. Brilliant.