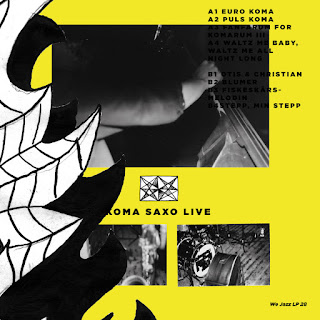 These two bands are tied together by the presence of two musicians, Swedish-born, Berlin-resident bassist Petter Eldh and German drummer Christian Lillinger, who together are creating some of the most interesting and insistent music around and doing it from the ground up of the traditional rhythm section of upright bass and drum kit. The two first recorded together a decade ago, in 2011, in a trio with alto saxophonist Wanja Slavin, a group that would later become the quartet Amok Amor with the addition of trumpeter Peter Evans. The bands discussed here are a trio and a quintet, each CD is a group’s second release. Both are mechanically precise, highly inventive and subject to sudden interruption. Rhythms seem to come apart in unsolvable ways only to reassemble unpredictably in short order, somehow in two places at once, as if traditional notions of rhythm had entered the realm of quantum mechanics.

Punkt.Vrt.Plastik ‒ pianist Kaja Draksler, Eldh and Lillinger ‒ assumes the form of the traditional piano trio then proceeds to reinvent it, catching something of the feeling of a roomful of unsynchronized sewing machines.

One of the group’s essential characteristics is insistence, subsuming both repetition and attack; another is dislocation, related as well, as if the intensity of the insistence is slightly unhinging. Together the three musicians insist on something that is simultaneously dislocating and dislocated, moving away from where you might expect it, but also, temporarily, settled, ensconced, placed, where it seems to have already arrived, creating at once a temporal and spatial dislocation that signals a point of freedom in the mechanism of composition and execution.

Its kinship with tradition resides in a certain resemblance to the great early-to mid-‘60s trios of Paul Bley, if Bley had resisted his own fluidity in favor of tighter knots, while eschewing melodists as partners in favor of machines, apparently randomizing ones at that. It is, therefore, a complete update, not only on the Bley model but on the format itself. The knotting is never clearer than on the title track, Lillinger’s “Somit”, which times in at a mere 1’23”, insistently going nowhere, merely repeating, worrying its own knottiness. Within these remarkable relationships of parts to wholes, other tracks stand out as well. Lillinger’s “Membran” is rapid-fire arpeggios that test time as well as confining it, while Eldh’s “Natt Raum” has the melodic feel of an errant national anthem, that is, an anthem wandering in search of a nation. The qualities of energy, fixity, mechanism and mobility seem to arise in new configurations on every track.

Koma Saxo’s 2019 debut was a breakthrough, the combination of a high-energy saxophone-dense free jazz band with Petter Eldh’s extensive studio post-production, so overt as to have the band enter playing backwards. This time the band is, insistently, Live (recorded at the 2019 We Jazz Festival in Helsinki) but is otherwise intact, with Eldh and Lillinger and the returning reed complement of Swedish tenor saxophonists Otis Sandsjö and Jonas Kullhammar and Finnish alto and baritone saxophonist Mikko Innanen.

The band consistently manages to be both precise and explosive from the outset, with Eldh’s “Euro Koma” holding together while on the verge of flying apart, subordinate riffs suddenly emerging, picked up and discarded. Kullhammar’s “Fanfarum For Komarum” combines shifting rhythmic patterns that are at once complex, by turn driving, demonic and playful, while the tenors launch proceedings with an introductory circular-breathing phrase that sounds like a loop from the band’s debut. The mood? It sounds like an Ayler-suffused band that has just been employed by a Caribbean nation to launch a new anthem for a recently annexed ancient Eastern European principality. Is there chatter and laughter in the background? Of course, and there’s even more on the Lillinger-composed “Blumer”. Works from outside the band have diverse sources. The surprisingly lyrical “Waltz Me Baby, Waltz Me All Night Long” was composed by guitarist Even Helte Hermansen for the Norwegian metal band Bushman’s Revenge. The program is capped off by a rousing version of Lev Knipper’s “Stepp, Min Stepp”, also known as “Polyushko-polye” and instantly recognizable whether associated with the Red Army or Swedish college students.

Each of these groups is making an original statement, realizing genuinely fresh musical possibilities. They deserve the widest possible hearing.