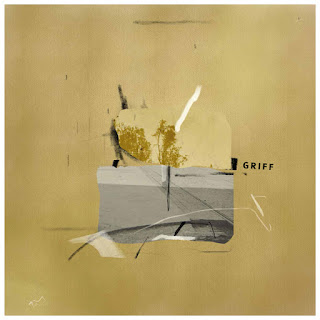 By Stef Gijssels
The first track of the album starts with a single repetitive bass tone, played with power and insistency. After 2.30 minutes, a single piano tone brightens the sound of the bass, with ascending notes, after which the vibraphone joins too. The single insistence continues, as does the anticipation and tension. The trio are Adam Pultz Melbye on double bass, Ingrid Schmoliner on piano, and Emilio Gordoa on vibraphone. Gradually the piano and vibraphone chords start moving at different rhythms and instead of emphasising the bass, they now alternate in shifting movements. The listening experience is at the same time refreshing and destabilising, especially as the overall tone gets more dramatic and keeps shifting, slowly moving back to a somewhat altered initial state.

The second track starts with repetitive piano chords, an opening for the other musicians to color the space between, with quiet rumblings, percussions and other sonic bits.

The third track opens with an maddening uptempo neverending circular loop, supported by a slow arco bass and interspersed with high feedback tones. Again, the rhythms shift, and background and foreground switch places. The effect is mesmerising, especially as the density increases and heavy piano chords create a sense of foreboding. The piece turns into an industrial mechanic machine, relentless and tense.

The last track continues in this totally mad intensity of repetitive insistency, and the world sounds different when it suddenly stops.
The CD also contains a hidden track, called "Which Itch", which I unfortunately do not have.

The trio has managed to create its own personal type of music, merging minimalism with repetitiveness (à la Reich and Glass) and more modern influences from jazz and improvised music. The result is unique and performed with skill.

More than worth looking for.


The titles on the album are based on this poem by Andrew Choate which - I assume - itself is based on the performance by the trio. The bold underlined parts are the titles of the tracks.
Candles Aren’t Water But Still: Drink Drink Drink

We want language to be real, or maybe we just want it to sound real.
Or do we want language to not sound real, but be real, or make real.
Real language is the stuff we hear, they say.
The sound makes it real.
When it goes from real – outside the body – back into the body, via earhair and fleshcushions, more realness.
Undulate with me, but preferably against me.
Reverberate like flesh.
Piano to double bass to vibraphone: which itch, what scratch?
Reverberant bell skin.
Tin rattle pitched to dent.
A new bell, a new skin.
Off-pitch dent muster, creeping plant vine.
Moss on rock.
Rock with moss.
Glow of moss on rock.
Race to slow down, longest.
Growth of fire from two stones.

Music as the ultimate time-lapse sequence.
Real-time zoom-in magnification of infinitesimal to durational.
Shimmering in thanks as response to doubt: now can walk further afield.
Finally unbaffled.

The fatally thankful clunderclap: now a single loose string to tauten or not.
Achieving inexactitude perfectly.
Measures and methods of perfecting inexactitude.
The just-so of an exact presence purring with immateriality.
Practiced polysemy, practical polyphony.
Make a sense to exercise the sensation of meaning.

The how? No please; no thanks.
Pleasure and gratitude are better than that.
Bones are made of flutes not the other way around.
Forget opposites, it’s contradictions in thirds, the better to stick and fit.
The strength of triangles for the ultimate supportive throb.
Candles aren’t water but still – drink drink drink
The moment of losing the intimidation of plants.
An angel made of water lighting candles.
Wilderness of detail delivered in static reframing.
Big, dark, open spaces illuminated with small, light, faint things.
A candle flame always roughly the same size.
But O the shapes.
Half human, half fire.
Half candle, half water.
The parabola of the vital thwack of life.