A Context for Mutual Aid Music 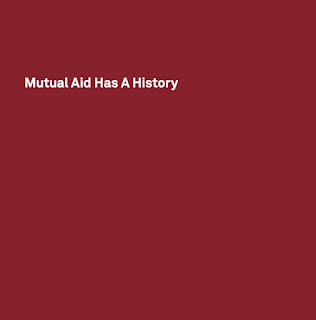 Mutual Aid Music has a history. Its first audible bud might be Battle Pieces from 2015, featuring half of the double quartet from Mutual Aid Music - with Sylvie Courvoisier on piano, Ingrid Laubrock on saxophones, Matt Moran on vibraphone, and Nate Wooley on trumpet - which would continue to develop Wooley’s social music on Battle Pieces 2 (2017) and Battle Pieces 4 (2019). The title, Battle Pieces, still given to the framework notations that constitute Mutual Aid Music, is presumably assumed from the collection of poems by Herman Melville - a Wooley favorite - that calls upon the charity of the national community during reconstruction after the US civil war and notably approaches history not through policy, economy, or tactics but through people and personalities, signaling the intentions of the music. Knknighgh (Minimal Poetry For Aram Saroyan) from 2017 - with Dre Hočevar on drums, Brandon Lopez on contrabass, Chris Pitsiokos on alto saxophone, and Wooley on trumpet - uses a similar approach. And so too does Seven Storey Mountain and its ever-evolving ensemble, perhaps beginning with the first in 2009 but most explicitly in Seven Story Mountain VI (2020), its Wooley-written liners describing the individualized direction, communal choice, and the risks and benefits of challenging the self and the community towards directions new to all. In the 24th, Winter 2020 issue of Sound American, the vital experimental music journal for which he is editor-in-chief, Wooley further expands on the intentions of the approach in “ Social or Mutual Aid Music,” with thoughts on leveraging the natural complexity of the people making this music and their social interactions to make complex music, creating an environment structurally distinct from previous models of improvisation and indeterminacy to cultivate the communication of these people, and illuminating the cardinal moral that the community of an ensemble ought not only make something complex and new but model the society they wish to see, in which power is balanced and the input of all is equally valued. A conversation between Ash Fure and Wooley in the 2021 Winter issue of Chamber Music Magazine expands on this purpose and reveals some recent collaborations that influenced it, including: Fure’s own approach to cultivating the mood, communication, and synergy of people outside of the music to intensify and amplify the immediacy and intimacy of the music they perform; Éliane Radigue’s individualized, mutual, variably-communicated composition style for her occam series; and Annea Lockwood’s openness and generosity to new environments, new events, new sounds, and the personal narratives intertwined with them. Bringing us to the present are the succinct and thorough liners of the release, Mutual Aid Music, which serve as a digest of the context above but I think are too humble in conveying the radical yet simply humane convictions that form the foundation of Mutual Aid Music.

What is Mutual Aid Music? On this release, it is performed by the Battle Pieces quartet, people known for pushing the boundaries of improvisation in music but with strong interpretive capability, plus Russell Greenberg on vibraphone and percussion, Joshua Modney on violin, Mariel Roberts on cello, and Cory Smythe on piano, people known for pushing the boundaries of composition interpretation in music but with strong improvisational capability. The nuts and bolts of notation and process are best described in the liners. But each person receives their individualized Battle Piece, or a framework score, along with additional materials concerning dynamics, timbre, concepts, and other aspects of sound; it’s my understanding that these are conveyed according to the comfort of the individual and the capability of the composer, in traditional notation, text, images, and/or other preferences. Each concerto consists of a Battle Piece, with one person asked to freely improvise their contribution, and the others given the choice to improvise or choose among the additional materials to build upon the framework. Every step of the way, from germ through the moment-to-moments of performance, asks the people to communicate mutually and always requires a choice in consideration of their own needs and wants and those of the ensemble community. It might remain unclear how this structure is much different than other music along the spectrum of through-composition and improvisation or indeterminacy, or how it challenges individuals and the ensemble towards new music but, returning to the primacy of the people making this music, I suspect the ensemble culture and a complicated collective communication outside and through this open musical structure encourage the subversion of traditional models.

Why is Mutual Aid Music? The aforementioned history discusses the intention behind the model, with the assumption that something new and something complex, generously interpreted, is desirable, choosing a solution that tries to avoid tired paths of genre or music theory and build upon the already complex people making the music and their nuanced social interactions. Wooley is quick to point out that the approach isn’t necessarily new, referencing some music of Lester St. Louis and Christian Wolff & Ryoko Akama in “Social or Mutual Aid Music.” Practically, how might this make something new? Using composition or other methods to subvert the personal performance idioms that form in free improvisation is an old issue. While indeterminate events create unique outcomes, the uniqueness of the performer’s language is often muffled if not silenced in favor of the composer’s conditions. Through mutual decisions outside and through the music, Mutual Aid Music strives to equilibrate the power balance between the will of the performer and the will of the composer, as well as the needs and wants of the individual and of the ensemble. It offers comfort in real community and the value that instills in others and the self. So too does the individualized conveyance methods for the sound material. And that’s the difference. Whereas Ornette Coleman suggested using unfamiliar instruments to create pure improvisations or new sounds, and whereas Company dropped classical performers and folk musicians into foreign improvisation environments for something new, Mutual Aid Music offers every comfort capable so musicians can focus all of their energies on the taxing task of actually listening to and engaging with the sounding ensemble community. Not soloing their style, not automatically aping the page, engaging. Rather than agitating people to see what will happen, it tries to provide ideal conditions to grow and develop together, to take risks together.

A lot of the language around Mutual Aid Music is about risk. The Seven Storey Mountain VI liners state “virtuosity is the possibility of collapse;” in the liners for this release, “Mutual Aid Music is as much a conceptual risk for me as a composer as it is a performative one for the musicians;” and in email exchanges with Wooley, “Mutual Aid Music is about the possibility of failure for all of us.” In reference to my own perception of similarities to Sarah Hennies’ treatment of failure - including Monologue for Wooley, the title of Primary Material for Failure One, and the expressed desire to expand the language of the trumpet from something like the theatrical extremes of “singing, crying, screaming, laughing” towards something more like “the sighs, the intimate way we talk to the people we love and are comfortable with, the unintended sounds, the sounds when we’re not being our best selves” “to create the feeling of intimacy in performance that one gets from being in a room with a person humming, sniffing, mumbling, talking about things that are not deep,” “to lift the everyday humanity of the voice by appreciating the profundity of things we take for granted,” and “to find a way to express that kind of flawed humanity,” Wooley says via email that “the virtuosity of failure is something I think a lot about right now, stemming from a questioning of what virtuosity is.” It might be hard to imagine someone collectively considered a master like Wooley could engage in real risk when evaluations of their work are so often laudations, but the feeling is genuine, even wearily saying of the instrument for which he is a leading light, “the trumpet and I battle every fucking day.” I assume the product of virtuosity in a creative field is creation - something new - and new is risky. But community absorbs risk. Like the resiliency of extended family, the collective boon of co-operative models like Catalytic Sound and their answer to Spotify in Catalytic Soundstream, or, conversely, the absurdity of the genius alone, community makes something risky, something new possible through real stability. And I believe Wooley recognizes this, stating in the Seven Storey Mountain VI liners, “It is terrifying to tempt failure in a solo setting, but the act of throwing yourself off a musical cliff within an ensemble takes on a singular dimension: you have to consider that the people around you are doing the same thing. The best way to avoid failure is to embrace those that jumped with you in an attempt to create something buoyant.” So, the natural complexity of the people that make the music and their nuanced interactions, with enough available energy to actually engage, practically necessitate making a music that is complex and new, and the comfort and stability of community create sustainable, reliable conditions for it to happen recurringly.

“The point [of Mutual Aid Music] is to give material in which the musicians make very personal decisions and the social interactions around those decisions make up the structural elements of the music” says Wooley, “it’s really quite messy, but so is any social interaction.” “We are all moving in different directions, with shifting priorities, and rapidly changing perceptions in ways that are profoundly rapid and deeply complex. Let’s fucking celebrate that! How insane! It’s incredible when you think about it.” And I think it’s incredible that Wooley has the ingenuity to tap that endless well of humanity for one of music. All of this is to say nothing of the success of the sound itself, but Wooley has cultivated a musical community of ethics and intention and sustainable development with Mutual Aid Music. Development not just through compounding the personal growth of the musicians already involved but with an eye towards expanding the community. I think that’s something worth celebrating.