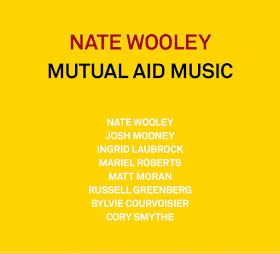 I think it is easy to get a little intimidated by a new Nate Wooley recording. There is usually a concept that tries to answer a question about the process of creation and creativity that he presents eloquently and humbly, but as a listener you may be inclined to wonder, as I sometimes find myself doing, 'will I get it?'

It's easy to let this happen, but let me say right now, 'don't let it!', especially with Mutual Aid Music, there is no professional development needed to enjoy the music that pours forth from this generous recording. You can just as easily forget discussion of battle pieces and mutual aid, and realize that what the composer and trumpeter has done is entrusted a group of top-notch musicians to co-develop his musical vision by relying on - and sometimes questioning - their musical intuitions. The result, as I have already more than hinted at, is a marvel.

So who here is involved? Wooley plays trumpet and he augments the group that has played on the previous Battle Pieces recordings, namely saxophonist Ingrid Laubrock, pianist Sylvie Courvoisier, vibraphonist Matt Moran, with additional piano from Cory Smythe, percussion from Russell Greenberg, and string work from violinist Joshua Modney and cellist Mariel Roberts. The aforementioned Battle Pieces group has released three albums to date on Relative Pitch, vols 1, 2, and 4, and following the extensive liner notes, it seems that this enhanced group is building on the currently unaccounted for vol 3. A Battle Piece, as far I currently understand it, draws on composed snippets of music in the service of constructing longer pieces. As Wooley himself puts it, “Mutual Aid Music provides material as a form of limitation that allows the mind to free itself of egoistic concerns, in turn, keeping the players from relying on muscle and musical memory as they enter and retreat from the slowly forming chaos of the group sound." For more context to this approach see Keith Prosk's excellent piece 'A Context for Mutual Aid Music.' For my purposes, what is most important here is that what Wooley and company develop is engrossing from the start to end of this double album.

The album begins with 'Mutual Aid Music I' and over the course of 10 minutes it shifts and morphs in unexpected but inviting ways. Moran's vibraphone and Wooley's trumpet are the first sounds to be heard. The shimmer of the slowly shifting tones of the vibraphone gives the trumpet a supportive and open canvas to work on. One of the pianos slowly takes over the harmonic layer, as Laubrock fills in some of the sonic gaps. Halfway through the track, the cello leads the group to a close after which a new movement begins. Now, the strings are more prominent. Modney's violin skates, scratches, and skips along with the other instruments for a while before the focus again shifts.

I started looking for parallels or obvious structural elements in the set up on the recording and jumped to the next 'disc' (virtually, as I'm listening to mp3 files) to listen to 'Mutual Aid Music I-I' but did not locate them. This version begins with a strong statement from the percussion family, but instead of the vibraphone, it is the crash/splash of a gong, which is then followed by the two strings in an extended duet. The violin skitters across the octaves while the cello provides a shifting foundation of low drones and slippery runs.

Flipping back to disc one, 'Mutual Aid Music II' starts with Laubrock and Wooley edging into the sonic center from opposite sides. They connect with snippets of melody and counter-melodies and eventually are joined by the vibraphone, giving the configuration a unique, floating sound. This piece in particular picks up the tempo with a piano's energetic contribution. To stick to the pattern I've begun, 'Mutual Music Aid II-I' on the other disc begins like a gentle ballad, the piano introducing a gentle melody, to which the violin provides textural plucks and a sonorous improvised line from the cello. Some of the passages on this track grow tense at times, while others introduce more playful moments.

I suppose one could keep flipping back and forth for a bit longer, as there is a lot of music to discover. It is also probably safe to say that there is not an uninspired part of the album over the course of the two discs. So, either the system that Wooley has been developing has worked to great effect or the musicians involved have brought such an invigorating and fresh perspective to the performance that nothing could derail them. I suspect the final output here is a mixture of the two, and regardless of how it is constructed, Mutual Aid Music is a fantastic listen.


Watch a performance at Roulette in NYC:
Paul on Friday, April 16, 2021
Share

Thank you for bringing this album to my attention. I ordered it immediately and after listening to it once, I can only confirm your impressions.