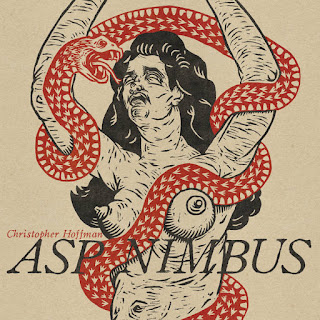 
Cellist Christopher Hoffman has played an integral role in the growth of Henry Threadgill’s groups Zooid, Double Up, and 14 or 15 Kestra: Agg for around ten years. Threadgill has embraced Hoffman’s sound and approach, centering him on several key albums, especially the renowned In for a Penny, In for a Pound. Like guitarist Liberty Ellman, he has also been composing his own music and defining a unique language and set of concepts. For as much as the shadow of Threadgill is expected to loom, it’s to both Hoffman and Ellman’s credit that their voices have become so independently recognizable. I wrote about the presence of Hoffman on Old Locks and Irregular Verbs, as well as drummer Craig Weinrib, and it was promising to see them together on this new album. One thing that’s helped Hoffman stand out is his open embrace of musical forms, deconstructing genre contexts to push his groups to some fresh and excitingly challenging places.

Asp Nimbus, Hoffman’s latest, features the radical setting of cello, drums, vibraphone, and bass, with Bryan Carrott and Rashaan Carter rounding out the lineup. Deepening the sound briefly, Hoffman has David Virelles guest on piano for “Dylan George.” Of course, any intriguing instrumentation would be little more than a novelty, were it not for captivating, even earwormy compositions. “Discretionary” slides in with a RZA-like vibe from the drums and vibes, Hoffman and Carter joining on parallel walking lines. It’s a super catchy kick-off to the album, and the solos set up a dazzling improvisatory conversation that extends through the entirety of the album. For as much as this is Hoffman’s album, it’s the communication between him, Carrot, Carter, and Weinrib that makes every moment transporting.

Much like Steve Lehman’s albums, Asp Nimbus is compact, funky, and addictive. Take “Orb,” a three-minute trip-hop dive into cell and vibes, taking a left turn in the final minute to a scattered multi-partite improvisation. It’s the kind of workout Lehman similarly drops into the middle of an album to remind listeners how fearless the group is. Given Hoffman’s discography, it wouldn’t be surprising for him to move on from this group. But the potential is writ large, especially with the album being on Out of Your Head, which also runs a sub-label Untamed… that helped several groups release rare live recordings in the past year. With all that opportunity, let’s hope there’s more Asp Nimbus in the future.

One last thing, for those readers who are fans of vinyl and album art, TJ Huff created a masterful woodcut, “The Death of Cleopatra,” for the cover art. It’s one you’ll definitely want on your shelves.