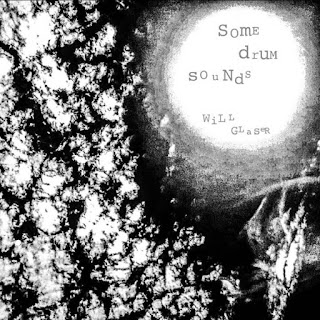 
Will Glaser is an in-demand drummer and percussionist who has played alongside Soweto Kinch, Dame Cleo Laine, Kit Downes, Nikki Iles, Dinosaur, Martin Speake, Yazz Ahmed, Eddie Parker, Freddie Gavita, Liam Noble and Sam Leak, to name a just a few fellow jazz musicians. He has been involved with Sam Eastmond's Spike Orchestra, Sam Rapley's Fable, Union Division with Moss Freed and many more. In 2020 he released New River Ramble with James Allsopp. Some Drum Sounds is a solo recording released May 6th.

'Crazy Hour' opens the album and is aptly titled. Sounds of children playing, people talking, and various percussive sounds are railroaded out by an improvisation across the top on djembe, the tight skin offering echoed sounds that resonate deep within the barrel of the drum. The piece is built through improvisation on some of the rhythmic and melodic ideas. As the track grows and builds, the textural quality improves and deepens, making this a terrific opener and introduction to the album.

'Broom with a View' begins with gentle drum hits and nuanced phrases, the rhythm patterns set and then worked around resulting in changing dynamics, with the pauses becoming as meaningful as the strikes. The rhythm intensifies in the second third with a free improvised section before returning to more established rhythms in the final phrases.

'Durations 1: In house Heckle' is the first of three tracks where Glaser duets with himself. Glaser describes these as "structured by different durations of time that are a loose compositional tool to structure improvisation and create chance moments." Those chance moments are introduced in the form of gongs, whispering touches and brush strokes which impart a sense of exploration and a brief delve into the drummer's mind. Some ideas are whimsical - a gong strike here, a cymbal there, whilst others are random, and ideas flow around the rhythmic patterns created.

'Panglossian People' is a track based around a 12 bar structure. The introduction, which precedes the composed track, is three minutes plus of rhythm workings that take several journeys across the basic structure, finding variations each time. The track itself is similar in length to the introduction and based on the 12 bar structure still but with freely improvised sections. The structure is such that the listener is carried on mesmeric pathways that differ and vary, with clear references right through to the original construct.

'A Hymn for Him' is a dedication to American jazz drummer Milford Graves and is a loosely improvised rondo form with the theme alternating with atmospheric improvised sections creating a reflective number. The final phrases work into a regulated rhythmic pattern which is mesmeric and engaging.

'Durations 2: Self-Talk' is subtle yet inspired by its rhythmic changes and generous ebbs and flows, the contrasts creating subtle changes in atmosphere, which are effective and vast, from the resonant bass to the trinkling cymbals. 'Scribbles' is short, fast and manages to get huge contrasts of tone and pattern into just over a minute of free drumming, whilst the strangely titled ' Porcupine Herder' begins with spaced-out beats and builds into a multi-layered soundboard. ' Durations 3: Didactic Discord' explores different rhythm patterns, sounds and techniques both freely improvised and structured.

Of the recording, Glaser says, "I'm really proud of this record. It doesn't get much more personal than this, and it was lovely to find ways of expressing my relationship with the instrument and focus on what I love. It's a strange little thing and hopefully comes across with the warmth I had in mind. It's all heavily improvised but with a few little tweaks."

The warmth and exploration of the drums and percussive sound come across loud and clear. What is really good about the tracks are the rhythmic patterns, diversions, returns, and improvisations built around structured foundations. This introduces familiarity to parts of the tracks, which means whether you enjoy freely improvised music or prefer a more structural format, this has appeal.

An engaging listen and a formidable recording. It is released initially on Bandcamp, with further platforms becoming available soon.