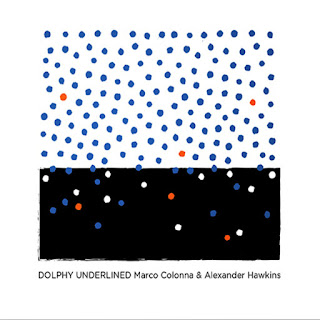 Tribute albums, for lack of a more precise term, double down on the task. Cosmetic comparisons yield simple dichotomies, plain one-dimensional statements and conclusions that neither reward nor encourage deep listening. Does one listen only to the recording at hand or in the context of its concept?

While Dolphy’s versions are polyphonous they are never cacophonous and employ a split-second deliberateness in conception and execution that illustrates intellect over flash but never at the expense of Soul. In my opinion they are the perfect gateway to the sense and sensibility of the “free jazz” that followed. Colonna and Hawkins approach them as Compositions and not just mere tunes to travel “Out There” and succeed in exploiting the parameters of the duo to parse out the range of Dolphy’s compositions and aesthetic almost as if note by note in an aural funhouse hall of mirrors.

“Something Sweet, Something Tender” is typical of the album in such a good way - Colonna and Hawkins play slowly parsing out the tune note by note, taking that moment’s consideration before each turn of note and phrase and in doing so draw the listener into Dolphy’s world, the world of free, unfettered uninhibited expression.

Hawkins’ solo reading of “Serene” has spare ECM quality to it. He opens by allowing the notes their lifespan before playing another and suspends time by doing so; the song makes its own way touching on a variety of moods and runs, hinting here and there, skirting the issue at times, its strength is the low-key energy Hawkins musters to sustain the song's mood. One can visualize him leaning into the keyboard then sitting back with everyone aural epiphany.

Colonna plays sopranino on “Gazzelloni” with a light evanescent tone grounded by Hawkins’ sure touch. And here is where a lot of duo recordings fall into rote cliches of leading following battling resolving or just play ignoring one another and putting a lot of effort into it. But here the two manage to do all in the spirit of the music without dismissing the listener. Because the music in all its variety and influences is inclusive. And Colonna and Hawkins always leave space for the listener.

“Straight Up and Down” uses that riff and tongue slap as Hawkins skips about the keyboard before they settle into their grooves. Here it isn’t deconstruction as much pacing and appreciation. This is not a dry mechanical scholarly approach to Dolphy. And then you get to 2’20'' and get the classic line, the woozy, gauzy one, and you realize, Holy S… Dolphy could write hooks!

On “245” the duo digs into the choicest riffs and manage to create the noir feeling of the original by playing it, not updating it or deconstructing it. It has a lugubrious slow ending that one can’t help but think of the tragically short life of its composer.

Recordings like Dolphy Underlined illustrate how Eric Dolphy opened the music wide for successive generations to play as they wish and Colonna and Hawkins do just by paying homage to the music and the artist by being thoughtful, passionate musicians, by being themselves.