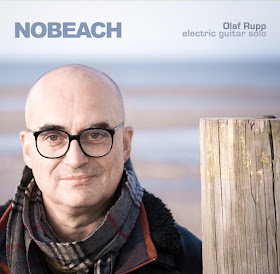 For Olaf Rupp, playing solo is an ensemble form like any other. As to his musical philosophy social and musical interaction is an interesting part of improvised music, but nothing more. It’s primarily about the music itself and the spontaneous development of musical ideas, which is just as complex in solo improvisation as in other forms of playing. In an interview with the Austrian magazine Freistil, Rupp said that in solo performance he knew what he had to play, that he only needed his hands and that everything then runs by itself. In groups, the music depended on many factors, he continued. For him the chemistry between the musicians is difficult to assess because the interplay doesn't always work. The larger the group, the greater the share of concepts, rhetoric and dominance. He thinks that it’s not the best ideas that prevail, but those that are presented most skilfully. He himself is rather interested in the spontaneous development of musical ideas, which is why he prefers trios, duos and especially solos.

His latest solo release, NOBEACH, is Olaf Rupp’s bow to Hans Reichel, the late great German guitarist, especially to his albums Bonobo Beach and Coco Bolo Nights (which can also be seen in the titles of the individual pieces). But while Reichel always had a smorgasbord of his often self-made instruments at hand, Rupp limits himself to the electric guitar and effects units. Similar to Reichel, Rupp doesn't care about stylistic boundaries. You can hear wide spatial sound surfaces, percussive tone chains rich in overtones, arpeggios and whistling harmonics, major and minor tones, echoes of Tortoise and Sonic Youth, scraping and scratching noises. It’s like bringing together a philosophy of sonic condensation and piling up sounds in the style of Cecil Taylor and Ornette Coleman with the more open, spacious approach of - say - Bill Frisell and Kenny Wheeler. On the one hand, this is absolutely avant-garde (as in “NOWHERE“) and on the other hand, it’s reminiscent of post rock or Jimi Hendrix’s sound garden, because Rupp does not shy away from tonal harmony and subtle melodies, even if they are strangely alienated (“NOKOKOBOLO“) or buried in noise (“NOVEMBER“). Some of the music does have a disorienting effect, but there’s even a weird ambient music feel to some of the tracks, which has the effect of crawling into the ear almost casually. It’s music that follows the sounds and lets the notes unfold in space.

Rupp’s idea of playing is rich, deep and mysterious; it’s diverse and complex without being “off the wall“. However, it has nothing ordinary about it since it’s interwoven with a supernatural beauty. It seems as if the sounds are carried like a feather in the wind - light and supple they glide up and down. Besides the unpredictability of form, his music is characterised by tenderness, care and clear-sighted passion. And by uncompromising authenticity. Olaf Rupp simply plays life.

NOBEACH is available as a digital release. You can buy the album and listen to two tracks here:

FJB: How do you get through the pandemic?

Olaf Rupp: The emergency aid for freelancers may not be used for living expenses, while large companies that receive emergency aid may even distribute dividends to their shareholders. At the same time, musicians are not allowed to have too much non-musical income in order not to fall out of the KSK (the German health insurance for artists). All musicians are sent into the HARTZ4 system (social welfare) while the income-neutral crisis basic income is not really discussed. That’s a crass state of affairs. In times like these, I wouldn’t dare talk in public about how I get by. There's a rough wind blowing. However, I do get by. There are always sensible, responsible, helpful people in all this madness.

FJB: Have you released more music via platforms like bandcamp since the pandemic began?

Olaf Rupp: No, I also started getting interested in download releases before the pandemic. There are simply too many labels that pass on all or most of the production costs for the recordings to the musicians. The idea of what the term “label“ once meant has changed fundamentally in the last few decades. Bandcamp is one of the ways to react to this change.

FJB: Consequently, you have recently published some things only via bandcamp, e.g. your solo album NOBEACH. Why have you only released it digitally?

Olaf Rupp: Well, it's still audiosemantics, my own label. Bandcamp is just the distribution, so to speak. At the beginning of the pandemic, that really helped me. I also think that downloading is definitely a good medium to fly under the radar of neoliberal insanity. Unfortunately, no one wanted to publish NOBEACH on vinyl or as a CD right away. At the moment I'm happy to pay my rent and buy strings.

FJB: Does it pay off at least a little bit?

Olaf Rupp: It was important to me to only offer really excellent stuff on bandcamp. So these are all works that I put a lot of work and heart and soul into, some of which I worked on for months, and which I would also release on CD or vinyl at any time. I think that in the long run, it’s worth it. People notice that these are not just quick recordings from the rehearsal room or bootlegs.

FJB: Do you think digital only releases will be the future for music?

Olaf Rupp: Improvised music is live music. Living music! Without concerts there will be no future.

FJB: Do you look forward to the summer/autumn and hope that there will be live concerts again?

Olaf Rupp: Due to social distancing rules, there will be no profitable concerts. So when all the shops open again and the Mallorca bombers fly south again, we will still be doing concerts where only twenty people are allowed to sit in large halls. That’s not feasible. Of course I’m happy about every single concert. And I hope that many organisers will creatively and energetically fight for new hygiene concepts in order to get at least a few performance opportunities. But that is no reason for excessive optimism.

Hey Olaf, dont't complain! Chancerlor*ette Mde Merkel has told you (as being a creative), how important you are to our livinig! She said that on TV!!!
That must be enough!

Besides all that awakward bullshit: This is a fucking great record and there should be no houshold without it!
That also goes for your current release on spanish guitar: "Nowhere Near"
(to be found on bandcamp as well)

There is a way to support your favorite artist: Buy their records, as long as you cant go into their concerts. You can always pay a little more than requested!

Thank you Martin for the re- and interview!