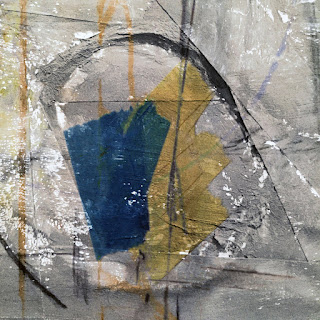 Ivo Perelman is a tenor saxophone player who has released over 100 albums across three decades so far. Nate Wooley is one of the leading trumpet players in the US and has played and recorded with many improvisers. This is the fifth time the pair have recorded together and the first time Perelman has recorded a duo with a trumpet player. Wooley is used to playing in the duo format with a reedsman as he has a duo with Ken Vandermark. The album was recorded at Park West Studios in Brooklyn in February 2020 and released in February 2021.

'Four' opens the album, and the track sees Wooley and Perelman engage in musical tag with Perelman setting out phrases which Wooley echoes, adding his intricacies before Perelman switches to elongated held notes with Wooley now setting the patterns - for a while at least this continues until the two enter into a fast and furious exchange of dynamics with the lead changing as quickly as the rivulets of notes which pour from the tenor sax in altissimo. In altissimo, Perelman is one of few players who is as furious as he is in lower registers. Often a player touches altissimo and lingers, maybe for a while as a novelty or to introduce a temporial change in the music, but Perelman uses it as his voice to speak and charge the music with an energy reflective of the man himself. Wooley, too is firing on all cylinders on the track and his intuitive harmonics and counterpoints are a revelation of the innate musicality of this player. The final phrases where Perelman warps and pushes, echoed almost tentatively by Wooley, are interesting.

' Two B' sees the saxophone set off at rapid pace in a series of loose reeded, breathy runs which Wolley echoes and disassembles the patterns to create contrasting runs of his own before both decide to extend and rise with elongated phrases, again swapped back and forth between players. The number is buzzy, fuzzy around the edges and considered - again, that contrast between the players finding a way to engage the listener constantly.

'Seven A' sees the sax largely answering the trumpet at a rate of around seven to one. The trumpet notes are held, the sax notes respond with precision and rapidity as if it has a lot to say, but the trumpet then adds its rapid-fire runs, matching the sax in note number in one fell swoop. The trumpet and sax seem to compete yet also supportive of each other, and the intuition between the players is tangible.

'Three A' is an explorative track where the musicians show their curiosity and their challenging nature, and restlessness. Wooley warps and wails across the phrasing, sounding at times like a drunken swinger, his harmonies hitting the mark just enough to remain connected with the saxophone lines.

' Five A', on the other hand, is disharmonic, copiously laced with challenging dissonance, and at times the contrast is harmonic. At others so disharmonious it could dry paint at 20 metres. Perelman is at once at his most melodic and at the same time at his most ferocious. Both musicians push the boundaries of their instruments, and the combination makes for a stirring listen. This is a joyous journey into duel improvisation, Perelman even allowing a rarely heard intake of breath to be recorded for emphasis.

'Eight' is a boundary-pushing track of interconnected motifs with the vocal Bel Canto - something which Perelman has been studying recently - style coming across. The voice is heard in tortuous snatches, which sound at once slightly mad but at the same time add another tone and texture to the already rich lines.

'Two A' is begun with a swing theme from Perelman in a nod to post-bop jazz elements - a melodic interlude which evolves into an improvised section, echoed and picked up by Wooley before the pair seek out their own improvised lines before interweaving for the final few phrases.

The eponymous 'Polarity' is aptly named for the players who each create their own voice and improvisation roads on this track- each being the guide and then the follower, the subtleties of interaction clear when they come together in harmonics, perfectly aligned and yet having the confidence once again to diverge and return.

'Nine Short' is short but very sweet with muted trumpet chuckling and warping across the sax lines - which offer little in the way of response other than intricate, short responses, making this track conversational and incredibly engaging.

'Six' finishes the album, and once again, the virtuosity of both musicians shows along with an adroitness for spontaneous yet considered improvisation. There is a poetic influence on this track. There is leader and follower as both musicians swap and throw the lead to each other. Driven by spontaneity yet considerate in the listening and interpretation of the other, the music itself is allowed to guide.

Throughout the album, there is an energy and sense of adventure, each musician willing to take the lead and also to follow, creating a sense of deep understanding between the two musicians. Although the recordings are spontaneous, there is enough coordination and innate harmony; it feels as if there was a lot of pre-thought. There is profound intimacy, yet also a sense of each musician having a distinct character. At once adventurous but also with a sense of reflection and examination, the tracks offer contrasts and conformity, diversion and unity in different proportions and at different stages. There is also a sense of enjoyment as the conversations evolve into cheeky retorts and challenging responses, each seeming to relish how the other player automatically picks up the essence of what they are saying.

Perelman recently discussed the future of jazz with me. He is very much of the notion that freer music is the future of jazz, a view hotly debated by enthusiasts but finding much agreement in players with a sense of adventure and sound music understanding. Hearing two improvisers creating such harmonious cooperation - in spirit and musical terms in the sense of finding out what they can create together whilst referencing classical, traditional jazz pedagogy and yet playing freely makes the idea of free jazz being the way ahead a definite possibility.