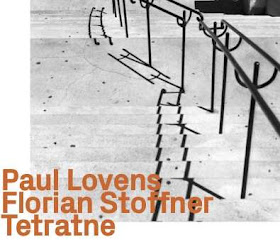 After 23 seconds, it’s there for the first time: a huge, deep boooom. Paul Lovens, the veteran drummer of German free jazz, uses his bass drum like a massive, ultra-low kettledrum. On the one hand he achieves this effect by tuning th e bass drum very low and on the other hand by using a very soft lambskin mallet on the foot pedal. Moreover, the bass drum is not only tuned very deep - also both heads are completely unmuffled, no hole is allowed to be cut into the front-head and if blankets and cushions are found inside the drum they are rigorously removed*. The contrast with his shrill cymbal work, his extended materials and rim shots of the toms and snare is striking (and something I haven't noticed in his music so prominent before). Moreover, these deep, drone-like thumps structure the improvisation, propelling it, slowing it down, dragging it forward again and pumping it up - especially in the first and second parts of the recording.

Tetratne documents a performance by Lovens and Swiss guitarist Florian Stoffner at the 2019 Sound Disobedience Festival in Ljubljana, it’s their second collaboration apart from their trio album Mein Freund der Baum with Rudi Mahall. The album’s name refers to quadruple structures and thus a physical polyphony - both musicians use all four limbs. For drummers that’s obvious, but Stoffner also uses his legs/feet to operate his effects devices. He also integrates different guitar tunings as an alternative approach to improvisation, making him an ideal accomplishment to Lovens, who also likes to tune his drumheads in an extravagant manner.

In general, the set is a cornucopia of wonderful and exciting ideas. In some passages Lovens really chops and cuts up the music (at the beginning of “Tetratne III“, for example). Sometimes he seems to climb down scales on his kit until he reaches the very bottom (at the aforementioned bass drum). In addition, the two musicians almost echo each other here and there (“Tetratne 1“), as if they were searching for orientation in a huge cave (even coughing noises are used). However, the greatest quality of this album is the fact that Lovens and Stoffner form a real unit, able to play the balls back and forth almost blindly. Stoffner knows to complement Lovens’s finely chiselled play with his sounds. His notes shoot through the room like bullets, bounce off the walls, stretch the space, seem to tumble down stairs. At the right moment, the guitar is like a friendly adversary to the hectic drum sounds and Stoffner lets himself be carried away by Lovens. What is more, the two have a feel for the architecture of the improvisation: The beginning of “Tetratne IV“ is a breather, when the duo incorporates a folk-like theme, before they pick up the pace again towards the end. In the exquisite liner notes Evan Parker puts it like this: “Given the presupposition that telepathy is involved, however deeply in the subconscious, and that these brain states are also electrical, then wavelengths are indeed involved but perhaps they are entrained in some way, like the multiplex signals that allow signals to pass in both directions down the same cable“. Very true indeed. Paul Lovens told me that he was glad that he met Florian Stoffner. Me too. Apart from Olaf Rupp’s and Rudi Fischerlehner’s Xenofox this is my favourite guitar/drum duo at the moment.

*Paul Lovens told me that he was lucky that the recording engineer followed his suggestion to place only one omnidirectional above his right knee instead of the usual overhead microphones plus front microphone in front of the bass drum. From there, all drum parts are heard equally clearly, the bass drum sounds the way he hears it. That’s one reason why he likes the recording a lot (s. picture above).

Tetratne is available as a CD.

Watch them at a show at Museu Nacional de Machado de Castro im Coimbra/Portugal:
Paul on Tuesday, May 11, 2021
Share