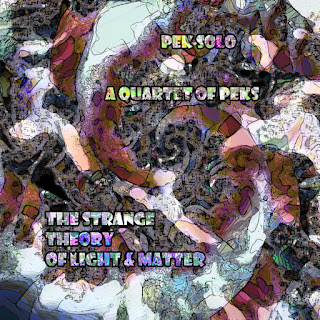 What hath coronavirus wrought? In relative isolation, mad wizard of improvisation Dave Peck, (PEK), found himself refracting inwardly, becoming, in a way, a living and self-contained realisation of the fractal artwork gracing the covers of Leap of Faith albums. The first of now a half-dozen PEK quartet albums, The Strange Theory of Light & Matter kicked off a series of multi-track improvisations that have grown new sub-sets of musics for both quartet and orchestral self-groupings, all instruments performed by PEK.

Here’s what the construction of a piece like “The Strange Theory of Light & Matter” looks like: The individual tracks are album-length improvisations, as he writes, “Each PEK plays the complete duration, while listening to the previous tracks.” Thus, the fractal-like self-spawning nature of the project, with improv 1 leading to improv 2x1 which becomes 3x(2x1) and finally there’s 4x(3x(2x1). True to its internal math, the instrumentation spread across the four tracks includes over 30 instruments:

How to approach the results? Personally, the sections featuring the double reeds like musette and English horn, and assorted recorders are among the most engaging. Like Peter Brötzmann, PEK makes the tarogato absolutely sing, and the musicality of interlaid improvisations are occasionally difficult and often gorgeous. Truly, listening to this is not unlike some classic AACM woodwinds recordings, like Roscoe Mitchell’s “Nonaah” quartet with Joseph Jarman, Henry Theadgill, and Wallace McMillan; Anthony Braxton’s “Composition 76” recorded with Threadgill and Douglas Ewart, and again with Mitchell and Jarman; and even Threadgill’s X-75 ensemble, with Ewart, Jarman, and McMillan (plus four basses and vocals). Similar to these other compositions, “The Strange Theory of Light & Matter” displays its own internal logic structure, with sets of material bent through layers of improvised (re-)interpretation. Conceptually, it’s a high-wire act, with some beautiful sections of harmonized flutes and whistles and long melodic lines that take some time to reveal their shape.

As mentioned, The Strange Theory of Light & Matter is merely the opening to the new world of PEK quartets. From the woodwinds-focused Schematic Abstractions for the Clarinet Family , Fixed Intentions for the Saxophone Family , and Completeness for Flutes and Double Reeds , to the broad palettes (including string, electronics, and percussion) of Unifications and Strange Beauty Out of Chaos , PEK is pushing the possibility of the self-contained quartet to some outer limits.

All albums are available via Bandcamp.